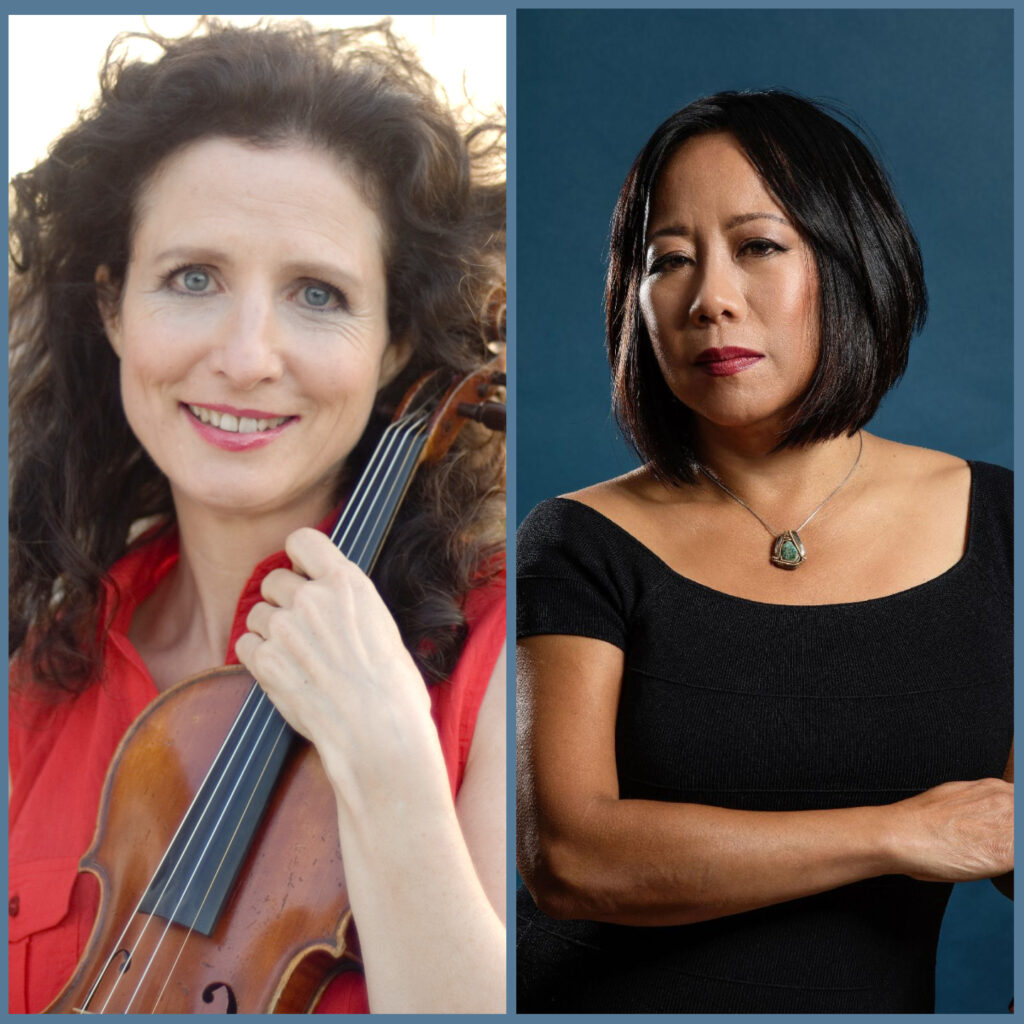 Program Notes: American composer Amy Beach wrote her Romance in 1893, the same year as Dvořák’s Sonatina, written when he was living in America. Belize-born British composer Errollyn Wallen’s Sojourner Truth, written for Madeleine, celebrates this extraordinary American Abolitionist. The program also includes the evergreen work The Lark Ascending, composed in 1914 originally for violin with piano, inspired by lines from a poem of the same name in 1881 by George Meredith.  The work was dedicated to the British violinist Marie Hall and first performed in 1920 before the composer arranged the work with an orchestra, becoming enduringly popular.

This new work for violin and piano takes the spirit of Sojourner Truth as its inspiration. Sojourner Truth (1797 – 1883) was born into slavery in New York and later became a prominent American abolitionist and women’s rights activist. Imagining her indomitable spirit which must have seen her nevertheless face moments of doubt and despair, I decided to base the work on the spiritual “O’er the crossing”. So many spirituals are about a deep yearning to cross over to the other side, waiting for a sign from God, to be taken home, away from the misery of a life of slavery. My work opens with the melody of “O’er the crossing” which Sojourner Truth would have known and probably have sung. To celebrate International Women’s Day, my own Sojourner Truth conquers despair, and rather like a march, certainly a walk of defiance, the spiritual is transformed into a song of freedom. Errollyn Wallen

The work was commissioned by Madeleine Mitchell with support from the RVW Trust and premiered by her on International Women’s Day, 8 March 2021 in London in Mitchell’s program ‘A Century of Music by UK Women (1921-2021). A video with Madeleine Mitchell and Errollyn Wallen, Sojourner Truth can be found here: https://youtu.be/0psZ1NtT97g

Madeleine Mitchell has been described by The Times as ‘one of the UK’s liveliest musical forces (and) foremost violinists’. She has performed as a solo violinist and chamber musician in 50 countries with a wide repertoire, frequently broadcast for radio and TV, in major festivals including the BBC Proms. She recently recorded live with the BBC National Orchestra of Wales the Grace Williams Violin Concerto for BBC Radio 3 and Vaughan Williams’s The Lark Ascending. Her ‘Century of Music by UK Women’ 1921-2021, for International Women’s Day with her London Chamber Ensemble was widely featured in the national media. Last year she won a Royal Philharmonic Society award to make a short film with the V&A Fabergé exhibition and the live concert she curated with the London Chamber Ensemble which she founded: https://youtu.be/J_ChAdTj4xA

Madeleine Mitchell has performed concertos with orchestras including the Czech and Polish Radio Symphony, Wurttemberg and Munich Chamber, Kyiv Radio/TV, St Petersburg Philharmonic, the Royal Philharmonic, and other London orchestras, Orchestra of the Swan, Welsh Chamber Orchestra, Orchestra de Bahia Brazil and for the BBC. She has been invited to tour Japan, performing Bruch Violin Concerto in Tokyo.

As a recording artist with an acclaimed discography, Madeleine has been nominated for Grammy and BBC Music Awards. Many well-known composers have written works especially for her which she’s recorded including Sir James MacMillan and Michael Nyman.  Her popular albums include Violin Songs and Violin Muse (with Guto Puw Violin Concerto written for her, with BBC NOW conducted by Edwin Outwater) as well as FiddleSticks – with Lou Harrison Violin Concerto with Percussion Orchestra. Mitchell’s Naxos album of Grace Williams Chamber Music with her London Chamber Ensemble was no.2 in the Classical Charts. Her recording of the Suite written for her by Robert Saxton, premiered at Three Choirs Festival, with Clare Hammond, was released in September and reviewed by Fanfare USA Jan ’23: “In the five movements a wide range of tempos and dynamics asks for and gets virtuoso responses”. Mitchell’s next album Violin Conversations will be released by Naxos in June 2023 of premiere recordings of works mostly by living UK composers including Thea Musgrave and works written for Madeleine including Errollyn Wallen, Douglas Knehans, Martin Butler, Howard Blake, and Kevin Malone.

In recital, Madeleine Mitchell represented Britain in the Canberra International Music Festival,  UKinNY at Lincoln Center, for the Queen’s Jubilee in Rome and ‘Great British Week’ in Kuwait. She has given recitals at Sydney Opera House, Seoul Center for the Arts – part of a 3-month world tour, in Vienna, Moscow, and Singapore as well as Wigmore Hall and London’s Southbank Centre.

Amongst many awards, Madeleine won the Tagore Gold Medal as a Foundation Scholar at the Royal College of Music, where she is now a Professor, followed by the prestigious Fulbright/ITT Fellowship to study in New York for a Master’s Degree at the Eastman and Juilliard schools. She frequently returns to tour the USA.

A highly creative personality, Madeleine devised the eclectic Red Violin, the first festival celebrating the violin across the arts, Founder Patron Lord Menuhin. She gives master classes worldwide and is on the faculty of www.orfeomusicfestival.com in the Dolomites and www.lmfl.org, performing and teaching. www.madeleinemitchell.com

From the time pianist Aileen Chanco made her stunning debut with the San Francisco Symphony at the age of thirteen, she has continued to enthrall audiences and critics alike with her instinctive brand of virtuosity and sensitivity. She caught the notice of then up-and-coming conductor, Kent Nagano who chose her to solo with him during an engagement with the Boston Pops. After the success of this east coast debut, Aileen was named a Presidential Scholar of the Arts and presented with a medal at the White House by the President, following which she made her debut at the Kennedy Center.

Determined to pursue a career as a performing artist, Aileen immersed herself in musical studies with Herbert Stessin at the Juilliard School where she received both her Bachelors’s and Master’s degrees in Music. Since then, she has appeared as a soloist, recitalist, and chamber musician throughout the United States, Canada, Europe, and Asia. Concerts have included performances in New York’s Alice Tully Hall, Washington D.C.’s Kennedy Center for the Performing Arts, and the Cultural Center for the Performing Arts in the Philippines. She has performed with orchestras including the Shreveport, Symphony Orchestra, Chamber Orchestra of Albuquerque, York Symphony Orchestra, Lima Symphony Orchestra and Berkeley Symphony Orchestra among others. Appearances with festival orchestras have included the Banff Festival Chamber Orchestra in Canada, the Desert Music Festival Orchestra of Arizona, and Music in the Mountains Festival Orchestra in California.

In 2003, Aileen made a highly anticipated return to the Philippines, the land of her birth to debut with the Manila Philharmonic Orchestra. “We were unbelievably awed by her rare expressive musicality. Her performance is something the Manila audience at the Philam Life Theater will never forget – it was a shining moment for our country.” –THE MANILA TIMES. The collaboration was so successful that Aileen returned at the request of the Cultural Center of the Philippines to perform the Philippine premiere of John Adam’s “Century Rolls” with the Philippine Philharmonic Orchestra. Her performance was hailed as a tremendous achievement” and critics described her as an “astonishing pianist”.

Aileen has received numerous awards and honors including first place in the Young Keyboard Artist International Competition, the Pepsi-Cola Young Artist Competition, and the Seventeen Magazine-General Motors National Concerto Competition. She was a recipient of the National Foundation for the Advancement in the Arts Award and she is an alumnus of the Aspen Summer Music Festival, the Banff Centre Resident Artist Program, the Moscow Conservatory in America, and the Schleswig-Holstein Musik Festival. Aileen resides in California with her husband, double bassist Bill Everett. She is both founder and Artistic Director of Music at the Mission Concert Series whose performances are held in one of California’s famous historic missions, Mission San Jose. Her passions are traveling, hiking fencing.