Kouzov Duo from the Archives 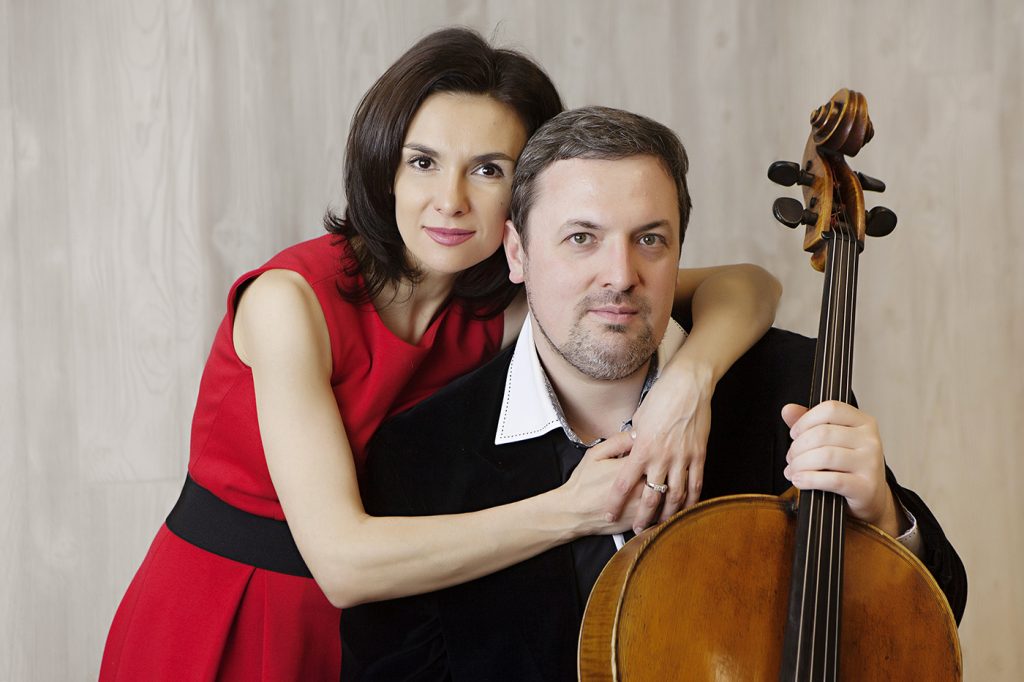 Johannes Brahms: Sonata No. 1 for Cello and Piano in E Minor, Op. 38

Bohuslav Martinu: Variations on a Theme by Rossini

Praised as “a true artist” by Maestro Mstislav Rostropovich, the young cellist Dmitry Kouzov won the First Prize at the International Beethoven Competition and the New York Cello Society “Rising Star” Award, and is a two-time laureate of Russia’s International “Virtuosi of the Year” Festival-Competition.

Mr. Kouzov has performed worldwide with orchestras, in recitals, and in chamber music performances. He made his New York orchestral début at Alice Tully Hall in 2005 under the baton of Maestro Raymond Leppard and has performed as a soloist with such orchestras as the St. Petersburg Symphony Orchestra (Russia), the State Academic Symphony Orchestra of the St. Petersburg Philharmonic, the National Symphony of Ukraine, the South Bohemian Chamber Philharmonic (Czech Republic), and the Cape Town and Johannesburg Philharmonic orchestras (South Africa), to name a few.

Mr. Kouzov has performed at such prestigious venues as Lincoln Center, the 92nd Street Y, (New York City), Sala São Paulo (Brazil), and at the most important venues in his native Russia, including both St. Petersburg Philharmonic Halls, the halls of the Moscow and St. Petersburg Conservatories, and the Mariinsky Theater. He has appeared as a guest artist at many international festivals such as Caramoor and Kneisel Hall (USA), the Verbier and International Bach Festivals (Switzerland), the Schleswig-Holstein (Germany), “Janacek May” (Czech Republic), “Art-November” (Russia), and “Kyiv Summer Music Nights” (Ukraine) Festivals. He has given command performances before Mikhail Gorbachev and Prince Andrew, Duke of York.

Mr. Kouzov’s discography includes both Shostakovich concertos with the St. Petersburg State Symphony and the cello concerto by Sean Hickey on the Delos label (2013); concertos by George Walker with the Sinfonia Varsovia on the Albany label; the complete C.P.E. Bach gamba sonatas on Naxos; “Two Hundred Years of Cello Masterpieces” on Marquis; and the complete Schumann piano trios on Onyx Classics.

In addition to his performing activities, Mr. Kouzov is currently an Associate Professor of Cello at the University of Illinois School of Music and was previously on the faculty of Juilliard and the Oberlin Conservatory.

Further information is available on www.dmitrykouzov.com.

Known for her passionate and musical interpretations and impressive technical facility, the St. Petersburg-born pianist Yulia Kouzova enjoys a varied international career as a soloist, chamber musician, and teacher. Yulia has performed recitals and concerti in the major cities in Russia and regularly performs in Russia’s most prestigious venues such as St. Petersburg Philharmonic Hall and State Capella. In addition to that, she has also performed throughout Europe in Holland, Portugal, France, Germany, Sweden, and the UK. Throughout her career, Yulia has received many awards, including a special prize at Jurmala International Piano Competition in Latvia and the Grand Prix and First Prize at the International Competition “Coast of Hope” in Bulgaria. In 2002, Yulia formed a piano duo Tatiana Brizhaneva. The duo appeared in numerous successful and critically acclaimed performances in St. Petersburg, Dusseldorf, and Munich, gave the Russian premiere of Germaine Tailleferre’s Jeux de Plein Air in 2008, and won 1st prize at the Maria Yudina Piano Duo Competition in St. Petersburg, and 2nd prize at the Bahchiev National Piano Duo Competition in Vologda, Russia.

Yulia combines her performing schedule with a passion for and commitment to teaching. She was on the faculty of the Rimsky-Korsakov Conservatory’s Special School for Gifted Children and at the Rimsky-Korsakov Conservatory in St. Petersburg. In 2009, she was seen and heard in Phil Grabsky’s new documentary, “In Search of Beethoven,” which received its theatrical premiere at London’s Barbican Theatre, its broadcast premiere on Sky Arts (UK), and has since been shown in the cinema and on television networks around the world.  In 2011 Yulia was an official collaborative pianist at the International Tchaikovsky Competition.