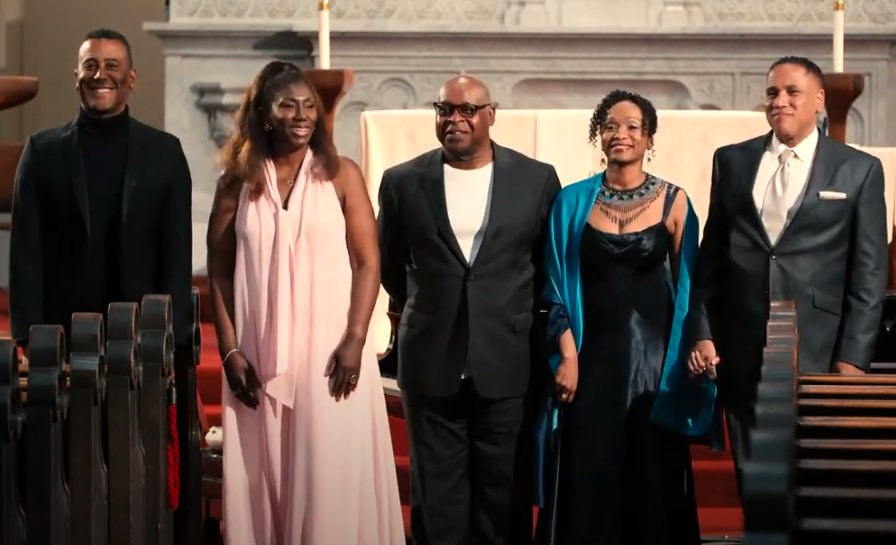 This is a program of spirituals and art songs by African American composers.

A combination of June and nineteenth, Juneteenth is a term that commemorates the end of legalized enslavement of people in the state of Texas on June 19, 1865, two years after Lincoln’s Emancipation Proclamation in 1863.

Today’s presentation of 12 compositions by 9 composers in the genres of, spiritual and art song is a musical tribute to the indomitable spirit of a people who experienced enslavement and freedom.

Hall Johnson: I Got to Lie Down

Camille Nickerson: Fais Do Do

Margaret Bonds:  You Can Tell the World

Margaret Bonds:  I Too (Sing America)

Jacqueline B. Hairston: Guide My Feet

Margaret Bonds: He’s Got The Whole World in His Hands

As a critically acclaimed Verdi soprano, Ms. Briggs is known for the depth and beauty of her voluptuous voice. Ms. Briggs is hailed as “an artist of vocal sensitivity, theatrical wisdom, and integrity.” Her commanding stage presence and moving interpretations have brought her to great success singing the title role in Aida with Nevada Opera, Sacramento Opera and Cedar Rapids Opera and Leonora in Il Trovatore with El Paso Opera, Opera Roanoke and Festival Opera of Walnut Creek as well as Amelia in Un Ballo in Maschera with Festival Opera of Walnut Creek.

Ms. Briggs is featured nationally on PBS performing the role of Emma Hyers in the multi-award-winning documentary film, Voices for Freedom, The Hyers Sisters’ Legacy. She is also featured as a soloist in IDAGIO Global Concert Hall Series in Masters of the Spiritual.

Ms. Sulker created the role of Corina in the world premiere of David Conte’s opera Firebird Motel. The original cast recording can be found on the Arsis label. She has also sung in the American premieres of the following operas: Adam Gorb’s Anya17 in the role of Mila, Tarik O’Regan’s Heart of Darkness in the role of River Woman, Fabrizio Carlone’s Bonjour M. Gauguin as La Voix Intérieure, and Zenobia Powell Perry’s Tawawa House as Fanny. Her film credits include a soundtrack performance for the movie Mimic and an on-camera operatic appearance in the feature film Jackson, directed by J.F. Lawton.

The soprano made her European concert debut with the Jugendsinfonieorchester Leipzig singing all the female roles in a concert version of Porgy and Bess and the soprano solos in Mendelssohn’s Psalm 42. These performances were held in Leipzig’s Gewandhaus and Prague’s Smetana Hall. She also performed a solo recital at Amsterdam’s Red Door Studio. As a special guest of the Ritz-Carlton in Osaka, Japan Ms. Sulker was invited back three times to perform a series of Christmas concerts.

Ms. Sulker earned scholarships to attend Bennington College and graduated with a Bachelor’s Degree in vocal performance. The soprano was awarded scholarships to attend both the Contemporary Opera and Song Program at the Banff Centre for the Arts in Canada and the OperaWorks Summer Intensive Program in Los Angeles. The soprano was also a resident artist for the Natchez Music Festival in Mississippi. A winner of career scholarships from the East Bay Opera League Vocal Competition, Ms. Sulker has also been a regional finalist with the NATS Competition and a finalist and award winner with the Irene Dalis Vocal Competition.

This season Robert appeared in his second telecast with the Mormon Tabernacle Choir. He returned to the Oakland Symphony Orchestra singing Brahms’ German Requiem, as well as solo appearances with the Milwaukee Symphony Orchestra and at Symphony Center in Chicago. Robert made his debut with Chicago Opera Theater in the world premiere of Dan Shore’s Freedom Ride and produced Masters of the Spiritual at New York’s Lincoln Center. He has appeared as the leading baritone in The James Baldwin Chronicles with Renee Baker and the Chicago Modern Orchestra Project, and as Pangloss in Bernstein’s Candide with the Oakland Symphony.  Robert has toured Germany, Austria, and Switzerland as the featured soloist with Roland Carter and the inSpirit Male Chorus performing spirituals of Noah Ryder, Roland Carter, and Roland Hayes. Since his solo debut at Carnegie Hall in 2005 (featuring a special appearance by the late Odetta), Sims has made several appearances at that venue performing the spirituals of Jacqueline B. Hairston, and most notably as a featured soloist in the 2009 series, Honor! A Celebration of the African American Cultural Legacy (at the invitation of Jessye Norman). His most recent Carnegie performance was a recital honoring the late Sylvia Olden Lee. Sims has been presented in the Bay Area numerous times by Four Seasons Concerts founded by the late Dr. W. Hazaiah Williams.  He sang the world premiere of Alice Walker’s Peace is Always a Good Idea for the Afro Solo Music Festival in San Francisco and Noah Gasser’s Black Suite Blues with the Oakland Symphony Orchestra. He has been presented in concert by Friends of Negro Spirituals and has premiered Lena McLin’s I’m a Soldier with the Chicago Sinfonietta among other orchestras throughout the U.S. Sims founded and toured nationally with the ensemble, Three Generations. This trio which specializes in American spirituals and folk songs has included the renowned George Shirley, Kenneth Overton, the late William Warfield, and Benjamin Matthews. He has also performed with the trio Simon, Sykes & Sims (with Simon Estes and Jubilant Sykes) singing spirituals and American songs. Sims has appeared on numerous radio and television programs including Bill McLaughlin’s Exploring Music, NPR’s Performance Today, The Leonard Lopate Show, Conversations with Ed Tracy, The Gospel Experience with Emmit Powell, The Studs Terkel Program, and two PBS specials, In the Spirit, and the just-released Voices for Freedom: the Hyers Sisters’ Dream, Change, and Legacy. Sims has performed as a soloist with the Mormon Tabernacle Choir in the televised Songs from the Soul with Robert Sims: A Heritage Special. He had several engagements on Hour of Power from the Crystal Cathedral. He has sung at New York’s Lincoln Center with the Ritz Chamber Players and a solo recital, “The Spirituals of Roland Hayes” narrated by George Shirley. Sims has worked with several composers and arrangers including Lena McLin, David Baker, Moses Hogan, Roland Carter,

Undine Smith Moore, Jacqueline Hairston, Wendell Logan, William Dawson, and Brazeal Dennard. He recently released a CD of spirituals arranged by Roland Hayes which accompanied the prize-winning biography of the celebrated tenor, Roland Hayes: The Legacy of an American Tenor (in collaboration with Christopher A. Brooks, Indiana University Press 2015). Other recordings include Songs From Spoon River by Lita Grier, Soul of a Singer, In the Spirit, and Three Generations. He has three recordings produced by the late Moses Hogan including Home in a-Dat Rock, Deep River, and La Magie des plus beaux Negro spirituals. After winning the Friedrich Schorr Competition, Mr. Sims appeared in Massenet’s Cendrillon, which won the National Opera America Award. He made his Goodman Theater debut in Kurt Weil’s Lost In the Stars under the direction of Frank Galati and sang the role of Dr. Malatesta in Don Pasquale with Opera Carolina. His other operatic credits include roles in Romeo et Juliette and Die Zauberflöte, Porgy and Bess, La Traviata, I Pagliacci, Cosi Fan Tutte and Le Nozze di Figaro. He is the recipient of the Living Heritage Foundation Lifetime Achievement Award and the Friends of Negro Spirituals Heritage Keeper’s Award. Mr. Sims is the donor of the Robert Sims Spiritual Prize for the George Shirley Vocal Competition. He is an alumnus of Oberlin Conservatory, SUNY Binghamton, Northwestern University, and Music Academy of the West. For more information visit www.RobertSims.com

Bradley Kynard, baritone, is no stranger to Bay Area audiences.  Mr. Kynard most recently performed with the Kronos Quartet in their commissioned piece – At War with Ourselves. This spring he performed with Opera Parallèle in their recent productions of Sophia’s Forest and Harriet’s Spirit. He performed baritone solos in Carmina Burana with Golden Gate Symphony and sang the role of Brooke (Little Women) with Island City Opera. During the lockdown, Mr. Kynard was fortunate enough to record several roles in Erling Wold’s operatic adaptation of (A Little Girl Dreams of Taking the Veil) and participate in an online performance of Dunn’s (Finding Medusa). He also performed the role of Nicandro (Atalanta) as a guest artist with the SF Conservatory of Music. He created the role of Don Ramiro in (Xochitl and the Flowers) with Opera Parallèle and also performed in the company’s production of (Trouble in Tahiti) in the Jazz Trio. Mr. Kynard premiered the role of Lazarus (Voyage of Mary Magdalene) and made his San Francisco Opera debut as Daggoo in (Moby Dick). He made his Opera Academy of California debut as Ramiro (L’heure Espagnole). Previous roles include Peter (Hansel and Gretel) with Solo Opera, Alfio (Cavalleria Rusticana), Remendado (Carmen), and Lord Cecil (Roberto Devereux) with Pocket Opera. Other engagements include Marchese d’Obiny (La Traviata) with Opera San Jose, Chirurgo (La Forza del destino) with West Bay Opera and Robbins (Porgy and Bess) with Mendocino Music Festival. Mr. Kynard has performed the role of Arsamene in Handel’s (Serse)  and the title role in Handel’s (Tamerlano) with The Handel Opera Project. www.bradleykynard.com

Carl Blake (piano) holds three degrees in piano performance: Bachelor of Music (magna cum laude) from Boston University, Master of Arts from San Jose State University, and Doctor of Musical Arts from Cornell University. Dr. Blake has performed three times in Weill Recital Hall (formerly, Carnegie Recital Hall) and has toured in Russia, France, England, Central and South America, and the Caribbean Islands as Artistic Ambassador with cellist Kim Cook (Distinguished Professor of Music at The Pennsylvania State University) for the United States Department of State.  Currently, he serves as Director of Music of The Church for the Fellowship of All Peoples in San Francisco and teaches piano in his private studio in Oakland.  Mr. Blake is a member of the Board of Directors of Noontime Concerts San Francisco.