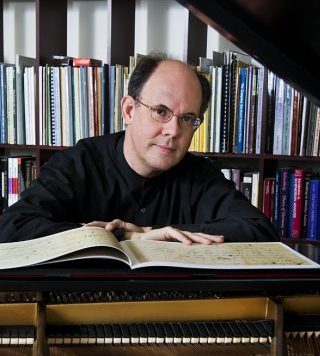 In Western music history, there are numerous pianist-composers who, although reigning monarchs of their craft in various European domains in their day, are now forgotten except among cognoscenti. This is tragic because a plethora of their buried treasures awaits unearthing and hearing. Charles-Valentin Alkan is one such monarch and the solo “Symphonie” one of his treasures.

Even the enthusiastic endorsements bestowed upon him by such eminences as Franz Liszt and Ferrucio Busoni have not supported his prominence. Liszt declared that Alkan had the most perfect technique he had ever seen. His piano music is dazzling and jaw-dropping, requiring the highest level of virtuosity as this week’s pianist, José Lopez, demonstrates. Symphony for Solo Piano belongs to a set of twelve piano etudes comprising Opus 39.  The multi-movement symphony appears as Nos. 4, 5, 6, and 7 in the set.  Alkan’s music is considered unconventional, innovative, and fiendishly difficult.  We hope you are enriched by this rare musical treasure.

Like Alkan, Comellas was a child prodigy who grew up in a distinguished musical family.  At an early age, he studied in Europe: first in Leipzig (Germany) and later in Paris.  In the early 1870s, he was a professor at the Peabody Conservatory of Music in Baltimore.  Later he lived in New York where he gave private lessons.  He died in La Havana (Cuba) near his birthplace by unknown causes at age 46.  Sonate brillante Opus 21 is one of his most notable works.

José López is Associate Professor and Coordinator of the Keyboard Studies Program at Florida International University in Miami, Florida, President of the South Florida Chapter of the American Liszt Society, and Honorary Secretary of the United Kingdom’s Alkan Society. He has performed throughout the United States, Italy, and Central and South America with orchestras, solo recitals, and chamber groups in concert halls, summer festivals such as the Music Festival of the Hamptons in New York and the Killington Music Festival in Vermont. Active throughout South Florida, he has been a featured performer in the Florida International University’s Music Festival; ISCM New Music Miami Festival, the Palm Beach Chamber Music Festival, Coral Gables’ Mainly Mozart Series, University of Miami’s Miami Festival, and as founder and co-director of the Deering Estate at Cutler’s “Chamber Music Series.”

Activities have included performances through villages around Lake Como, Italy for the 2008 International Convention on 12-tone music and a paper on piano works by Riccardo Malipiero as part of the proceedings at the Villa Vigoni German/Italian Center. Dr. López’s world premiere recording of the complete solo piano music by Riccardo Malipiero was released in the summer of 2012 and has received favorable reviews by critic Tim Smith in The Baltimore Sun, Fanfare magazine and MusicWeb International. His release of the complete Mozart transcriptions by French Romantic composer Charles Valentin Alkan on the Toccata Classics label (2015) also received reviews in the London Times, Fanfare, and Alkan Society.  His upcoming project for Toccata Classics is a continuation of the “lost Cuban composers” series; begun in 2015 with the release of works by José Comellas, this time devoted to the operatic transcriptions of Nicolás Ruíz Espadero.

A versatile pianist and enthusiastic performer of chamber music, Dr. López was a founding member of the Dalbergi Trio, has collaborated as a member of FIU’s resident new music ensemble, the Nodus Ensemble, and was the orchestral pianist with the Florida Philharmonic for 13 years. He is currently active performing and recording new and old obscure works for piano and strings along with solo piano works. His interest in contemporary music features frequent world premieres and collaborations with composers along with his pursuit of resurrecting rarely heard works by Romantic and Classical composers.

Born in Cuba into an immigrant family of Spanish, Basque, and Sephardic descent, José emigrated to the United States at a young age.  López received his MM and DMA degrees from the University of Miami School of Music, where he studied with Dr. Rosalina Sackstein, a former pupil of Claudio Arrau and Rafael de Silva. He has recorded for SNE, Albany, Innova, and Toccata Classics record labels.