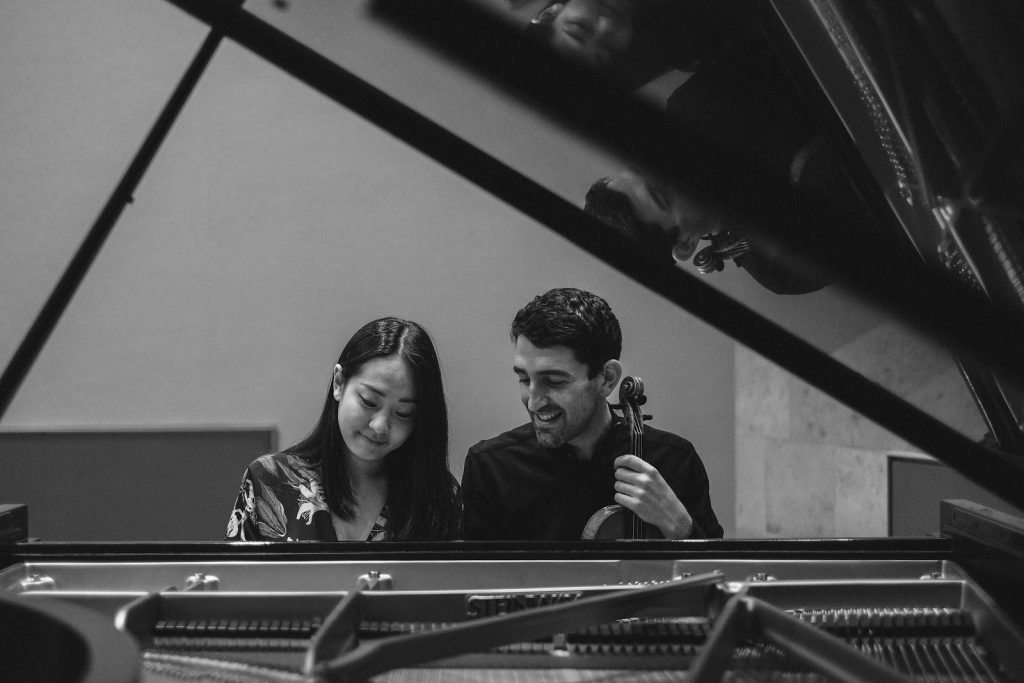 Jung-eun Kim and Patrick Galvin have been performing together since 2015 when they met while studying at the San Francisco Conservatory of Music. Since then they have performed repertoire from every period of classical music, and in 2019 the pair premiered a work they commissioned from composer Stefan Cwik, titled American Troubadours. They took this piece and others on tour, with a live performance at NPR’s Hawaii station, HPR. This performance was broadcast in the Spring of 2020 on the program “Applause in a Small Room.”

In the 2019-2020 season, the duo will be performing American Troubadours as well as music by Grieg, Gershwin, Schumann, Shostakovich, Prokofiev, and others. In the Spring of 2020, Jung-eun and Patrick will perform multiple programs featuring the music of Beethoven in honor of his 250th birthday, including a series of concerts at SunsetArts in San Francisco.

Jung-eun Kim was born in Changwon, South Korea, and made her solo debut with the Changwon Philharmonic Orchestra at age 11. Since then, Jung-eun has won several prizes both in the United States and Korea and has concertized with numerous symphony orchestras. In 2018 she was featured on NPR’s From the Top program. She is pursuing her Master’s degree in the Chamber Music program at the San Francisco Conservatory of Music. She performs regularly in solo appearances and with violinist Patrick Galvin and with her piano trio, the L’arc Trio.

Patrick Galvin was born in San Francisco, CA, and made his solo debut at age 11 with the Oakland East Bay Symphony. Patrick studied at the Peabody Conservatory in Baltimore; the Prayner Konservatorium in Vienna, Austria; and at the San Francisco Conservatory of Music. Patrick performs regularly throughout the United States and abroad, most often in solo appearances and with the pianist Jung-eun Kim.