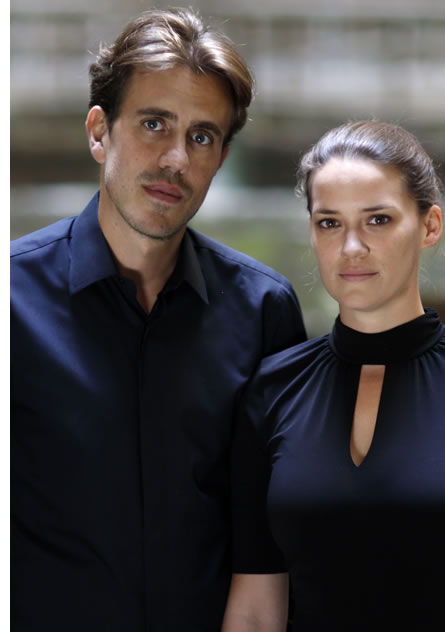 -the ‘Kreutzersonata’ with Nikolaas Kende for Warner Classics. This CD won the Gold Label prize and received rave reviews.

German Composer, Pianist, Organist, and Conductor of the Romantic Era

In a certain sense, Felix Mendelssohn is incomparable. No other composer—not Bach, Beethoven, Mozart, or Chopin—had achieved Mendelssohn’s level of maturity, mastery, and productivity as a teen composer. By the time Felix was sixteen years old, he had written an extraordinary number of first-rate compositions which include piano solos, duos, trios and quartets, chamber music of great variety, violin/piano sonatas, a string octet, symphonies, and the Overture to Shakespeare’s Midsummer Night’s Dream. The violin and piano sonata on this week’s concert is representative of this early compositional period; Mendelssohn wrote it at age 14. The sonata has three movements and opens with an adagio of tranquil beauty before proceeding to the standard first movement form in a fast tempo.

German Composer and Pianist of the Classical Era

The title page to the publication of this sonata very formally reads: Sonata for piano and violin obbligato written in a concertante style, similar to a concerto, composed and dedicated to his friend, R. Kreutzer, member of the Conservatory of Music in Paris, first violin of the Academy of Arts, and of the Imperial Chamber, by L. van Beethoven.  This is a work conceived on a grand scale.

But the dirt behind the formal title page in the briefest form might read like this. Beethoven’s last-minute dedication was made after the sonata was completed and premiered. It was originally written for George Bridgetower, an Afro-Anglo-European violin virtuoso who was visiting Vienna in the spring of 1803. Beethoven and Bridgetower got along so famously that they booked a concert (with Beethoven playing the piano) and the composer then rushed to finish a violin sonata he had begun the previous year. The duo premiered the sonata with very little rehearsal and to great approbation by royal patrons in attendance. Beethoven was so impressed with Bridgetower that he scribbled on the manuscript: Sonata per uno mulaticco lunattico (Sonata for a madman mulatto).  Alas, the honeymoon came to a swift end when Bridgetower made an unflattering comment about a woman whom Beethoven respected and cherished.  Exactly what was said is unknown; however,  Beethoven was furious.  As a person who sometimes held grudges forever, he never spoke to Bridgetower again and changed the sonata’s dedication to Kreutzer, considered the greatest violinist of the day, before its publication in 1805.  Bridgetower was bitter for the rest of his life.

Beethoven met Kreutzer in 1798. Not much is known about their relationship but the two men don’t appear to have been close. Beethoven appreciated Kreutzer’s playing; Kreutzer did not generally appreciate Beethoven’s music particularly this sonata dedicated to him which (according to Berlioz) he found “outrageously unintelligible.”

Born in 1984 in Brussels, she received her first violin lessons at the age of four. At fourteen she was invited by Yehudi Menuhin to pursue her musical studies at the Yehudi Menuhin School near London. Subsequently she studied with Natasha Boyarsky at Royal College of Music in London, Stephan Picard at Hochschule für Musik Hanns Eisler in Berlin, and Augustin Dumay at Queen Elisabeth Music Chapel in Belgium where she graduated in 2013.

In 2013 Jolente made her debut in America (Texas) with the Waco Symphony Orchestra and Stephen Heyde, where she performed Tchaikovsky violin concerto. This was followed by a recital tour with Nikolaas Kende.

In Belgium Jolente has performed regularly in halls like Bozar, Flagey, Elisabeth Hall, de Singel, and the Roma and she played concerts in festivals such as the Festival van Vlaanderen and the Festival de Montpellier and Menton. Furthermore, she has performed in countries such as Russia, France, Italy, Portugal, Croatia, The Netherlands, Spain, as well as in London’s Wigmore Hall, Royal Albert Hall and at the Gstaad Menuhin Festival in Switzerland.

Being an outstanding chamber music performer she formed the duo with pianist Nikolaas Kende. Together they founded the Rubens Ensemble in 2007.

the ‘Kreutzersonata’ with Nikolaas Kende for Warner Classics. This CD won the Gold Label prize and received rave reviews.

Born in Antwerp in 1981, Nikolaas studied at the Antwerp conservatory with his parents, Heidi Hendrickx and Levente Kende and at the Amsterdam Conservatory with Jan Wijn. Eventually he started an intense cooperation with Elisso Virsaladze at the Hochschule für Musik und Theater München and at the Scuola di Musica Fiesole. In addition he was taught by people like Dmitri Bashkirov, Aldo Ciccolini, Murray Perahia, Dmitri Alexeev, and Radu Lupu. Whilst training as a pianist he was given the 2013 “Oranjebeurs” and grants by the Deutscher Akademischer Austauschdienst in 2004 and 2005.

While still young, Nikolaas Kende won several competitions: the Cantabile competition (Antwerp, 1998), the EPTA international competition for piano duos (1999), the Axion Classics competition (Brussels, 1999), the Stefaan de Jonghe competition (Aalst, 2000) and the Tenuto competition (Brussels, 2002). In 2002 he was a laureate of the Belgian Foundation for Young Soloists, in 2004 he came second in the competition of the Young Pianist Foundation in The Hague, and in 2005 he won the PianistenParade in ’s-Hertogenbosch, in which he also obtained the prizes of the public and of the press. In the next year he was a laureate of the music competition of the Ghent Rotary Club and he won the 57th competition organized by the Friends of the Concertgebouw Amsterdam and the Royal Concertgebouw Orchestra. In this competition he won on top the Prize given by the press and the AVRO Klassiek prize, the latter enabled him to record a CD.

In 2007 he reached the semi-finals of the Queen Elisabeth Competition and became a laureate of the Young Soloists Competition organized by the Royal Flemish Philharmonic, conducted by Philippe Herreweghe. Still young, he began his international career with invitations to France, Germany, Spain, Portugal, Italy, Austria, and Bulgaria. He made his American debut (California and Texas) in 2009 with lavish press reviews and an invitation for another touring project in 2013.

He has performed on all the important Belgian concert stages. Recently, concerts have taken him to Spain, the Czech Republic, Romania, the Netherlands Antilles, and the festivals of Montpellier, Menton, and Vexin in France. He has played concertos by Bach, Mozart, Beethoven, Chopin, Brahms, Tchaikovsky, Poulenc, Ravel, Rakhmaninov and Bartók, with orchestras such as the Brussels Philharmonic, the Orchestre Royal de Chambre de Wallonie, the Royal Flemish Philharmonic and the Flanders Symphony Orchestra conducted by Etienne Siebens, Koen Kessels, Ivo Venkov, Jurgen Küssmaul, Ernst van Tiel, Daniele Callegari, Dirk Vermeulen, Paul Goodwin, Stephen Heyde, and David Angus among others.

Nikolaas Kende is also an avid chamber musician. Since 2003 he has formed a duo with violinist Jolente De Maeyer and was a co-founder of the Rubens Ensemble in 2007. He was associated with the Narziss und Goldmund Trio for the recording of Schubert’s Piano Trio (D. 929) for Phaedra Classics, the label he recorded also a cd with solo piano works by Johannes Brahms. He has made numerous recordings for radio (the Belgian classical channel Klara, RTBF, AVRO, Radio Romania, France Musique, WDR) and television.

In 2015, Nikolaas was appointed professor of piano at the Royal Conservatory of Antwerp.

Future projects include recital tours, both solo and in duo with Jolente, in Canada, America, South-Africa, and China.