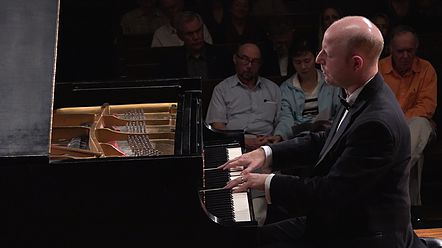 Jeffrey LaDeur enjoys a busy career as soloist, chamber musician and educator. Praised for his “articulate, expressive work at the keyboard” (San Francisco Classical Voice) and “…dazzling pianism…” (Sarasota Herald Tribune) Jeffrey has concertized around the world including performances at Carnegie Hall, the Kennedy Center for the Performing Arts, Shanghai Conservatory of Music, Eastman Theater, Hochschule für Musik in Frankfurt, and Banff Centre for the Arts. His performances have been broadcast over WFMT Chicago, South Dakota Public Radio and America’s Music Festivals hosted by Marin Alsop. At the invitation of the Naumburg Foundation, Jeffrey made his Carnegie debut in Weill Recital Hall in March 2015. Jeffrey is Founder and Artistic Director of New Piano Collective, an artistic alliance between seven pianists of international renown, all alumni of the Eastman School of Music.

As soloist with orchestra, Jeffrey made an auspicious debut with the Eastman Philharmonic performing César Franck’s Variations Symphoniques during his first semester of study at the Eastman School of Music. Recent orchestral engagements include concertos with the Oakland East Bay Symphony, San Jose Chamber Orchestra, Bear Valley Music Festival Orchestra, and Denver Philharmonic, collaborating with esteemed conductors such as George Cleve, Lawrence Golan, Michael Morgan, and Neil Varon. Jeffrey began the 2015-2016 season with a performance of Mozart’s Concerto in d minor K.466 with the Merced Symphony and music director, Ming Luke.

LaDeur has performed in recital throughout the United States including appearances at the Kennedy Center, Dakota Sky International Piano Festival, Bach Dancing and Dynamite Society, and PianoForte Studios, Chicago.  Jeffrey draws on his love of and experience with French music to offer Reflections in the Water, the complete solo piano music of Claude Debussy in the context of his inspirations and influences.

A passionate chamber musician, LaDeur is a founding member of the acclaimed Delphi Trio.  The Trio maintains an international concert schedule and has performed at the Great Lakes Chamber Music Festival, Artist Series Concerts of Sarasota, WFMT Chicago, the Banff Centre, and many prestigious series throughout California. Prize winners of the 2015 Orlando Competition in Kerkrade, the Delphi Trio concertized throughout the Netherlands, Germany, and Belgium including a broadcast for Dutch Radio 4. In addition to his activities with the Trio, Jeffrey has collaborated with artists such as Robert Mann, Bonnie Hampton, Geoff Nuttall, Ian Swensen, Axel Strauss, the Telegraph Quartet, and the Afiara Quartet.

Education through music is central to LaDeur’s mission as a performer. Jeffrey is a faculty member of the Crowden Music Center and serves as piano faculty for the school’s after school chamber music program and summer chamber music workshop. LaDeur is also on faculty of Young Chamber Musicians, an intensive chamber music program in partnership with Kohl Mansion in Burlingame.  With his colleagues Liana Berube and Michelle Kwon of the Delphi Trio, he has developed a program for emerging artists which guides serious young ensembles through their first professional concert experience.

Jeffrey completed his undergraduate education at the Eastman School of Music, studying with Douglas Humpherys and earned a Master’s Degree in chamber music from the San Francisco Conservatory of Music studying with Yoshikazu Nagai. LaDeur completed additional studies with Robert McDonald through the Taos School of Music and has worked with members of the Saint Lawrence, Brentano, and Borromeo Quartets. Jeffrey received his formative musical training from Mark Edwards and Annie Sherter, a student of Vlado Perlemuter and Alfred Cortot.