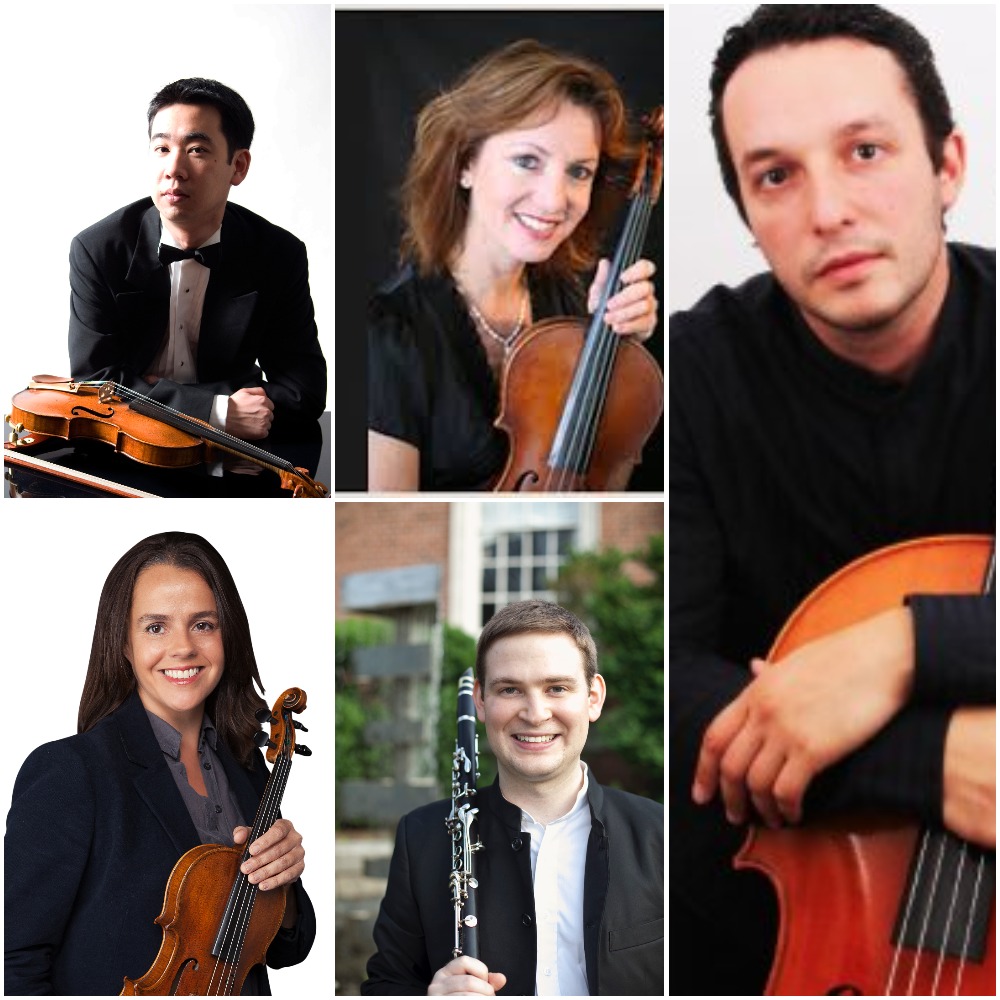 Shall We Dance: Promenade “Walking the dog”

Porgy and Bess: Bess, you is my woman now

Girl Crazy: I got rhythm

Farallon Quintet, founded in 2012, is a dynamic San Francisco Bay Area ensemble, and the only professional chamber music group focused exclusively on the repertoire for clarinet quintet—string quartet plus clarinet. As champions of the clarinet quintet genre, the group’s mission is to build awareness around this lesser-known yet artistically significant musical form. In addition to playing the classics, the quintet seeks to perform rarely heard works, innovative arrangements, and new music by living composers. With 600+ existing clarinet quintets to choose from, the ensemble offers diverse and engaging programs to the general public.

The group is made up of leading Bay Area musicians who are principal players in the San Francisco Ballet Orchestra, as well as the symphonies of Santa Rosa, Marin, Berkeley, Fremont, Modesto, and Sacramento. Collectively, its members are graduates of the Curtis Institute, Cleveland Institute, Rice University, Indiana University, and the Hochschule für Music in Freiberg, Germany. Individually, they have studied chamber music with the Juilliard, Cleveland, Guarneri, Emerson, Vermeer, Takacs, Arditti, Muir, Cavani, American, and Amadeus Quartets and have performed in chamber music settings with the Emerson Quartet, Leon Fleisher, Lynn Harrell, Chen Xi, and Yuja Wang.

The group takes its name from the Farallon Islands, located off the coast of San Francisco. In addition to being a landmark location close to where the players live and work, its meaning is “pillar” or “steep rock” in Spanish—indicates the group’s vision to become an important “pillar” or “rock” in classical music by exposing audiences to the relatively unknown yet substantial clarinet quintet repertoire. The Farallon Islands also represent the group’s inspiration, which is founded on the simplicity and beauty of nature. In fact, the group is known to intersperse rehearsals with hikes in the mountains and road trips—all with the intent to discover the natural beauties of Northern California.

Recognized for his “rich, luscious tone quality” (The Clarinet), Rob Patterson is quickly establishing himself as one of the most exciting and versatile clarinetists of his generation. Currently, he is the Acting Principal Clarinet with the Louisville Orchestra. Prior to this position, he served as Acting Principal Clarinet with Baltimore Symphony, Principal Clarinet of Charlottesville Symphony, and a faculty member at the University of Virginia. In addition, he’s played guest principal for the orchestras in Cincinnati, Richmond, Huntsville, and Modesto. Recent teaching engagements include masterclasses at The Grieg Academy, The Sibelius Academy, The Royal College of Music in Stockholm, the Norwegian University of Science and Technology in Trondheim, and the Norwegian State Academy of Music in Oslo. Particularly at home in chamber music, Rob has performed as a member of the VERGE Ensemble and Ensemble 39. While a Strathmore Artist in Residence, he presented a series of solo recitals, masterclasses, and educational concerts at the John F. Kennedy Center for the Performing Arts. His festival appearances include Bravo! Vail, Festival Lyrique International de Belle-Île-en-Mer, Garth Newel Music Center, Music from Angel Fire, and the Yellow Barn Music Festival. A devoted teacher, he recently released Advanced Clarinet Studies: The Art of Chunking, published by Theodore Presser. Previous teaching engagements include Carnegie Hall’s National Youth Orchestra, the Sewanee Summer Festival, and the Yellow Barn Young Artist Program. He has presented classes at The Juilliard School, Rice University, Teatro del Lago (Chile), James Madison University, University of Kentucky, Morehead State University, Virginia Commonwealth University, Virginia Tech, and Taipei Municipal University.

Praised for her “delicate but fervent” playing (Joshua Kosman, San Francisco Chronicle), Icelandic violinist Hrabba Atladottir is currently based in Berkeley, California where she performs as a chamber musician with such ensembles as New Century Chamber Orchestra, Left Coast Chamber Ensemble, Empyrean Ensemble, ECO ensemble, and San Francisco Contemporary Music Players. With a focus on new music, she has worked closely with composers Lachenmann, Boulez, Esa Pekka Salonen, and Saariaho. She studied in Berlin with Axel Gerhardt and Tomasz Tomaszewski and while there, played regularly with orchestras including Berlin Philharmonic, Deutsche Oper, and Deutsche Symphonieorchester. While in New York, she played regularly with the Metropolitan Opera, New York City Opera, Orchestra of St. Luke’s, and New Jersey Symphony and worked with the Either/Or ensemble in close collaboration with Helmut Lachenmann. Hrabba has toured around the world with Icelandic pop artist Björk and with violinist Nigel Kennedy. She currently teaches violin at UC Berkeley and Mills College.

Violinist Matthew Oshida has performed with orchestras throughout the country including Utah Symphony, San Jose Symphony, Sarasota Opera, Huntsville Symphony, and Tulsa Symphony, Opera, and Ballet. He has appeared in principal positions with the orchestras in Berkeley, San Jose, Walnut Creek, Fremont, Sacramento, and Modesto, recorded with the Mormon Tabernacle Choir and accompanied such popular artists as Sarah Brightman, Michael Bolton, Trans-Siberian Orchestra, Mannheim Steamroller, and Harry Connick, Jr. Working in musical theatre, he was the solo violinist on the 2016 national tour of Rodgers and Hammerstein’s Cinderella and has performed in productions for TheatreWorks Silicon Valley including The Bridges of Madison County and Rags. As a studio musician, he has worked at Capitol Records, Skywalker Sound, HUGEsound, Soularium Recording Studios, and LA East and played on commercial albums for Sony Classical and Telarc. As a chamber musician, he studied with members of the Cleveland and Juilliard Quartets, performed with members of the Emerson Quartet, and participated in live broadcasts for BBC Radio 3. Outside of the concert hall, he has demonstrated the link between music and leadership through performing at training seminars for executives at such companies as eBay, Chevron, Intel, WPP, and Protiviti. His principal teachers include Franco Gulli and Igor Gruppman on violin and Katherine Murdock on viola. His music festival participation includes the Gstaad Menuhin Festival, Schleswig-Holstein Musik Festival, Aldeburgh Festival, AIMS Festival, Mendocino Music Festival, Monterey Jazz Festival, Cabrillo Festival of Contemporary Music, Midsummer Mozart, and Music in the Mountains. He received a B.M. from Indiana University and M.M. from SUNY Stony Brook.

An active Bay Area violist, Elizabeth Prior is Principal Violist with the Santa Rosa Symphony and is a season substitute with the San Francisco Ballet Orchestra. She is also associate principal with the Marin Symphony and performs regularly with the San Francisco Opera Orchestra, the New Century Chamber Orchestra, and the San Francisco Symphony. Other orchestral credits include Freiburg Philharmonic as Associate Principal and Cape Town Symphony. She has toured and worked with Südwestfunk, Stuttgart Radio, Basel Symphony, and the Mannheim Opera Orchestras. A native of South Africa, she was a prizewinner in the International String Competition in Pretoria and gave her debut at Carnegie Hall with the Russian Chamber Orchestra. She tours regularly as a soloist with the Chamber Ensemble of Cologne in France and has done two recent tours with the New Century Chamber Orchestra. Other engagements include Amelia Island Chamber Music Festival, Sun Valley Summer Symphony, Midsummer Mozart, and Chamber Music San Francisco. She performed regular viola recitals for 13 years with Maestro Donald Runnicles accompanying on the piano.

Russian Cellist Evgeny Tonkha was born into a musical family and studied at the Gnessin Music School (class of his father Professor Vladimir Tonkha) and later at the Hanns Eisler Academy of Music in Berlin. He has performed with the Berlin Philharmonic, Berlin Konzerthaus, Leipzig Gewandhaus, Hamburg Philharmonie, and the Bavarian Radio Symphony Orchestra while playing under such conductors as Sir Simon Rattle, Zubin Mehta, Claudio Abbado, Seiji Ozawa, Mariss Jansons, and Daniel Barenboim. He received First Prize and the Gold Medal at the 12th International Cello Competition in the Czech Republic and the Special Jury Prize at the 13th International Tchaikovsky Competition. Evgeny has performed as a soloist with the Berlin Konzerthaus Orchestra, Neue Philharmonie in Hamburg, Berliner Camerata, the Moscow Virtuosi Chamber Orchestra, and the symphony orchestras in Nizhny Novgorod, Tolyatti, and Ryazan. Evgeny has participated in many international music festivals including the Moscow Autumn, Sakharov Arts Festival, Sofia Gubaidulina Festival, Pablo Casals Festival in Colmar, France, Chopin Festival in London, Santander Festival in Spain, Rodion Shchedrin Festival in Berlin, and Beauvais Cello Festival in France. He has collaborated with multiple contemporary composers including Sofia Gubaidulina, Mikhail Bronner, Victor Suslin, and Franghiz Ali-Zadeh. Evgeny is registered in “The Golden Book of Russia’s Talents” and is currently based in Los Angeles where he is the music director of MiMoDa studio.