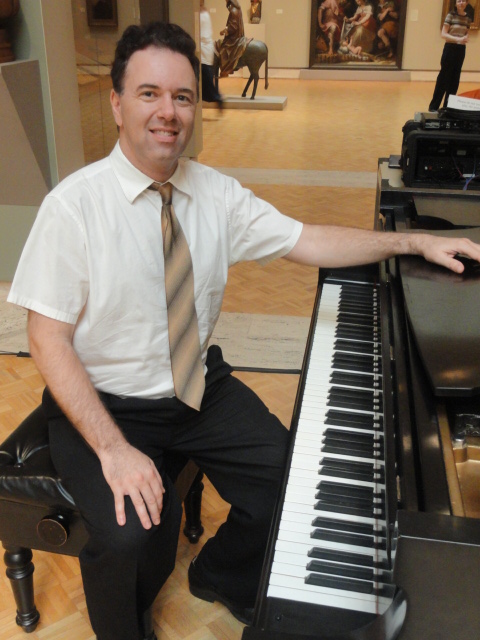 A native of Bucharest, Romania, pianist Eugene Alcalay began playing at age two and composing at age eight. In 1984 Eugene came under the tutelage of Leonard Bernstein, who affirmed his “outstanding talent as both a performer and composer”. Eugene became the first recipient of The Leonard Bernstein Scholarship for gifted young musicians at Indiana University School of Music, where he earned Bachelor’s Degrees in both Piano and Composition. Aided by Maestro Bernstein, Eugene continued his studies at The Curtis Institute of Music and then The Juilliard School, where he attained Master’s and Doctoral degrees in Piano Performance. His teachers included Seymour Lipkin, Robert McDonald, Karen Shaw, James Tocco, Milton Babbitt and Ned Rorem.

Currently, Professor of Piano at Azusa Pacific University School of Music near Los Angeles, Eugene’s performance career has taken him to five continents and such United States venues as Alice Tully Hall and Carnegie Hall– Isaac Stern Auditorium. He has spent summers at prestigious international music festivals such as Tanglewood, Taos, Kneisel Hall, and Ravinia. In 2003 Eugene became a Fulbright Scholar, teaching at the Universidad Nacional Conservatory of Music in  Bogota, Colombia, a country which he revisited in 2004 as Fulbright Senior Specialist/Artist in Residence. He has also given master classes and judged piano competitions in Europe and the United States.  His 2007 London debut, sponsored by Steinway and the Beethoven Piano Society of Europe, was “highly acclaimed” as a “poetic” and “memorable recital”: in his review, Alberto Portugheis emphasized “Alcalay’s command of line, color, temperament, imagination” and the “extraordinary qualities” of his pianism.

Eugene’s CD, “Lyrical Liszt”, released in 2008 by the Partita Records label, has been praised for “poetry, sensitivity… admirable tonal variety…beautiful playing throughout” (EPTA UK). His 2010 Paris debut was preceded by a “superb” recital to a large audience at St. Martin-in-the-Fields, London: displaying “power and gusto” as well as “kaleidoscopic lyrical qualities”,

Eugene proved himself “an interpreter of rare distinction” (Malcolm Miller, Music &amp; Vision). In addition to return engagements in London, the 2012-13 season included appearances in Oregon, Pittsburgh, San Francisco, England, Norway, and Tegucigalpa-Honduras, as well as short-term residencies in the People’s Republic of China. In 2014 he returned to China and also performed in Israel and in the Beethoven Festival, London.

Highlights of Eugene’s 2015 season included a recital at Budapest’s Liszt Museum of the Academy of Music, a concert/masterclass tour of India, and teaching at the Crescendo Summer Institute in Tokaj, Hungary, where he returned in 2016 and 2017.  In 2015 he was also invited to judge the Liszt-Garrison International Piano Competition in Baltimore, Maryland, and twice revisited China, once to perform as soloist in the Beethoven Choral Fantasy. Since 2016 he has served as President of the newly established Southern California Chapter of the American Liszt Society.  http://fb.me/theamericanlisztsocietysocal  The 2016-17 and 2017-2018 seasons have featured tours of Australia and New Zealand, return appearances for the American Liszt Society, as well as recitals and master classes in San Francisco, CA and Hartford, Conn., Basel, Switzerland, China, Romania and Poland, as well as the Beethoven Piano Society of Europe, to feature Beethoven Hammerklavier Sonata Op.106