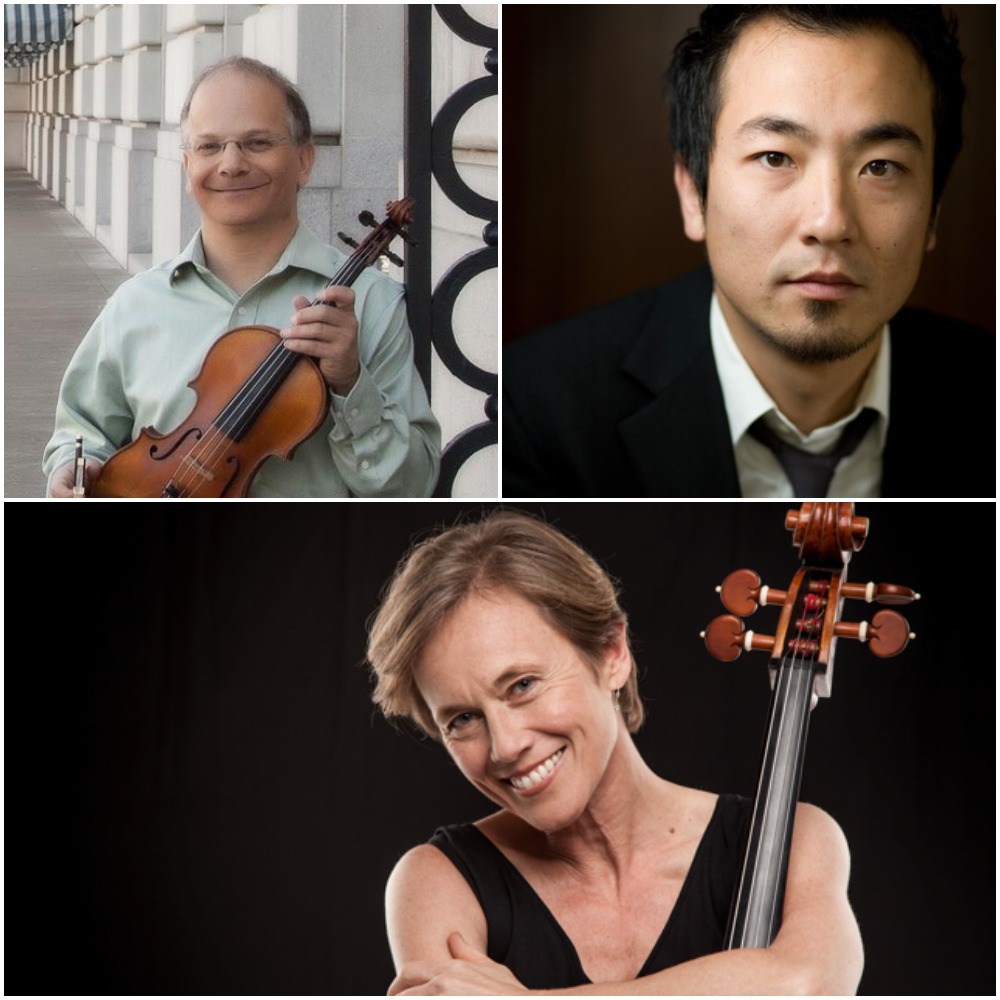 Ludwig van Beethoven: Sonata No. 10 for Violin and Piano in G Major, Op. 96

The Eos Ensemble founded by violinist Craig Reiss is an exciting chamber music group comprised mainly of members of the San Francisco Opera orchestra.  The goal of the group is to present concerts of wide-ranging musical styles and instrumental combinations.  We offer the opportunity to hear these talented musicians rise from the pit to the stage, playing everything from Beethoven to Ligeti.  Audiences throughout the Bay Area have been thrilled to experience the artistry normally reserved for the grand canvas of opera transformed to the intimacy of chamber music.  The Eos Ensemble has received grants from Music Performance Trust Fund and KIDDO! to present educational concerts in the Mill Valley schools.  They also recently performed on the national radio broadcast “West Coast Live.”   San Francisco Classical Voice said, “Every little detail was perfectly in place and meticulously balanced… They played with genuine depth and power.”

Craig Reiss has been a member of the San Francisco Opera and Associate Principal Second Violin of the San Francisco Ballet Orchestra since 1993.  He has been a featured soloist with the San Francisco Ballet Orchestra, the Carmel Bach Festival, the Oakland Civic Orchestra, Master Sinfonia Chamber Orchestra, the Nova Vista Symphony, the Central Massachusetts Symphony, as well as the Vallejo Symphony.  He has coached chamber music and orchestral programs at Marin Academy High School, the Blackburn Music Academy, and the Marin Symphony Youth Orchestra.  He is also director of the Eos Ensemble, an exciting chamber music group comprised mainly of members of the San Francisco Opera orchestra whose goal is to present concerts of wide-ranging musical styles and instrumental combinations.  The Eos Ensemble performs regularly throughout the Bay Area; they have also received grants to do educational programming and were featured on the national radio program “West Coast Live.”  Mr. Reiss earned his Bachelor of Music degree while working with Rafael Druian at Boston University and in 1987 became an Associate of the Royal College of Music in London where he studied with Trevor Williams. He has participated in music festivals at Tanglewood, Spoleto, the Colorado Music Festival, and was Associate Concertmaster and featured soloist with the National Repertory Orchestra.  When not playing his fiddle, Craig enjoys running, cycling, skiing, and traveling with his wife Cheryl and two children Alana and Julian.

Grammy-nominated cellist, Michelle Djokic, enjoys a versatile career as a chamber musician, soloist, and orchestral player. A 2018 review from Seattle’s SunBreak for an appearance with Emerald City Music reads, “Bloch’s Prayer for cello and piano, from his Jewish Life No. 1, was a moving and beautiful evocation of Jewish life in the hands of cellist Michelle Djokic… Her sound had warmth, depth, and gentleness…” Michelle’s lifelong passion for chamber music and the collaborative process of rehearsing was her inspiration for the launching of Musikiwest in 2017 based in Palo Alto, CA. Musikiwest harnesses the collaborative power of chamber music to engender empathic awareness, promote conflict resolution, and build peaceable communities. Using scripted “open rehearsals” in a unique and creative format, Musikiwest addresses difficult issues in young people’s lives such as bullying, shaming, and exclusion. The most sought after performing artists of today gather for this meaningful opportunity to share with adolescents through their incredible artistry and generosity of spirit. Hundreds of lives continue to be impacted by this powerful experience.

Michelle is also the founder and director of Concordia Chamber Players based in New Hope, PA since 1997. Concordia has commissioned and premiered new works by Clarice Assad as well as J.P. Jofre. Since its inception, Michelle has presented the most gifted artists with creative programming in the bucolic setting of Bucks County. In addition to her Concordia appearances on the east coast, Michelle mentors young students of the Foundation Academy Charter Public School in Trenton, NJ through the Stand Partners program.

Michelle is the last of seven children born to survivors of WWII. Michelle’s French mother lived in occupied France and her Serbian father, part of the underground forces, was liberated by the Americans from a concentration camp in occupied France. Despite neither parent having gone to college and Michelle’s father having to work in a steel mill most of his life in the US, many sacrifices were made for all seven children to be provided with music lessons. Education was the most valued element of their upbringing. Music was only intended to be part of their education and so the eldest went on to pursue their studies at Rutgers, Harvard, Oberlin, and Princeton. The love for music instilled in the children, however, could not be denied. The last three children pursued their studies in music receiving their degrees at the Juilliard School of Music.

Michelle made her debut as a soloist with the Philadelphia Orchestra at 12 years of age and went on to win numerous competitions. She has worked as principal cellist with several orchestras throughout the country. She is currently a member of the New Century Chamber Orchestra in San Francisco.

She is married to squash legend, Mark Talbott who is the founder and director of the squash program at Stanford University. They have two children one of whom is in medical school at Duke University and the other works alongside his father at Stanford as a squash coach. Music was always part of their lives and Michelle believes it very much contributed to their positive and empathic engagement with the world.

Keisuke Nakagoshi has received training from Emanuel Ax, Gilbert Kalish, Menahem Pressler, and Paul Hersh and he has performed concert stages across the United States including the Kennedy Center, Carnegie Hall, and Hollywood Bowl. In 2014, he made a solo debut with San Francisco Symphony on Ingvar Lidholm’s Poesis with Herbert Blomstedt conducting. Keisuke and Swiss pianist Eva-Maria Zimmermann formed a piano duet, ZOFO, and their first CD was nominated for a Grammy award for best chamber music/small ensemble in 2013. Aside from ZOFO, Mr. Nakagoshi is a pianist in residence at the San Francisco Conservatory of Music, and he serves as pianist in the production team for Opera Parallèle.