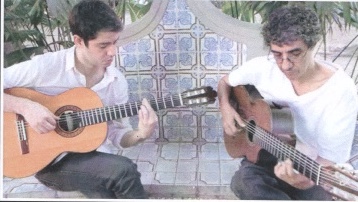 NOTHING IS MORE BEAUTIFUL THAN A GUITAR, SAVE PERHAPS TWO.  FREDRIC CHOPIN

Edinho Gerber possesses a rich musical vocabulary developed in the two countries where he was raised: the United States and Brazil. Navigating effortlessly between the genres of choro, jazz, samba, and blues, he is always in search of the intersection points within his dual cultural identity.  A staple in the Chicago music scene for many years, he was a highly in-demand sideman having played with countless U.S. based Brazilian groups, including Som Brasil, Renato Anesi Trio,  A Cor do Brasil, and led the samba-jazz group Zona Sul. He has performed in prestigious festivals and concerts in throughout the United States, Russia, and Japan, and currently resides in Rio de Janeiro where he performs regularly with Duo Violão Brasil and recently released “Benjamim e Edinho” an inventive cross-cultural collaboration with Ben Lamar Gay.