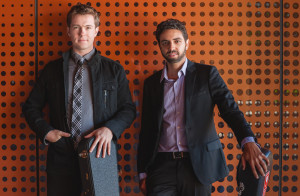 Fool on the Hill

DuoSF is quickly becoming recognized as one of America’s most promising young guitar ensembles. In a review of their debut CD, Classical Guitar Magazine wrote, “effortlessly played”, and “this interpretation is one of the very best I have heard…an outstanding recording of some lovely music in superb performances beautifully captured. One to hunt for!”

Recent concerts have taken their exciting and engaging programs on tours of Southeast Asia with appearances in Indonesia, Malaysia, and Thailand to the Kravis Center’s young artist’s series, the Musikfest Festival in Allentown, Pennsylvania, and to many guitar and chamber music series throughout California.

With a deep belief in the power of the arts and the need for artists to rise up as entrepreneurs and advocates for their craft, Robert and Christopher co-founded The California Conservatory of Music in 2011. The school currently enriches and empowers the lives of over 400 students and families in the San Francisco Bay Area. In 2012, DuoSF founded The Peninsula Guitar Series, a concert series that brings international talent to the Bay Area to present concerts and masterclasses.

“The relaxed, natural sense of flow let the beauty of the music shine through. These works were in the artists’ blood; listeners could tell from the precision of their playing and the close-knit voicing of the two instruments. Each composition was lovingly played, with a fond appreciation for every lively tempo change and deliciously rich harmonic surprise. The performances were as delightful and uplifting as the music was heartfelt, colorful, and alive.”

-Sharon McDaniel, Programming Director of the Kravis Center for the Performing Arts

“…they played as if from a single mind…Equally impressive was Radames Gnattali’s Suite Retratos, a series of portraits of Brazilian musical heroes: Ernesto Nazareth, Anacleto de Madeiros and Chiquinha Gonzaga (the Suite opens with a tribute to Pixinguinha, which was omitted from this performance). The music is wildly complex rhythmically, with frequent shifts of meter, accent, and tempo, but the duo performed flawlessly.”

“You [DuoSF] play this music flawless with understanding and excitement and are able to create a moment of Beauty in Color and Strength. This is only possible as a duo with respect for each other and by mastering the instrument. Congratulations! I sincerely hope to hear much more from your Duo”