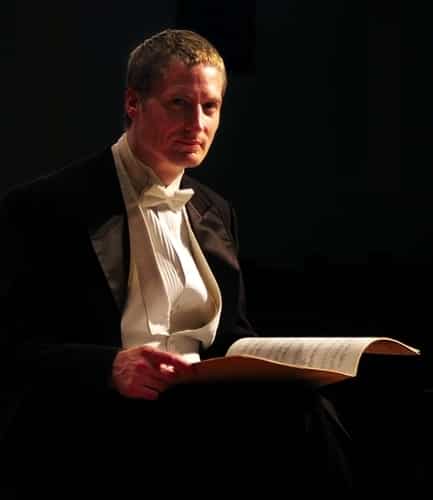 Pianist Daniel Glover has performed in 42 states and 25 countries throughout Europe, Asia, North America, South America, and the Caribbean. Mr. Glover has trained with such luminaries as Eugene List, Abbey Simon, Jerome Lowenthal, Nancy Bachus, and Thomas LaRatta. He holds a master’s degree from New York’s Juilliard School, where he was a scholarship student. Among his numerous competition awards is first prize in the prestigious Liederkranz Competition in 1990. His successful 1992 Carnegie Hall recital in New York was a result of winning the Artist’s International Competition. Mr. Glover also appeared in Washington, D.C.’s Corcoran Gallery and at the St. Petersburg Palaces Festival in Russia.

The San Jose Mercury News said, “Glover is an incisive, exciting, and apparently tireless player…a natural for a hyper-virtuosic challenge.” He has been hailed for his “extraordinary technique, analytical understanding and determined phrasing from the first to the last bar.” (Südhessische Post, Germany)

The San Francisco Classical Voice remarked, “Brilliant, tender, whimsical, sparkling…Glover brought everything together into a well balanced, evenly measured medium.” “The elegance and civility of Glover’s approach were musically unimpeachable.” “Dazzling…golly can he play! I kept expecting smoke to emerge from the interior of the instrument…a flawless sense of Lisztian style incorporating its emotional depth.”