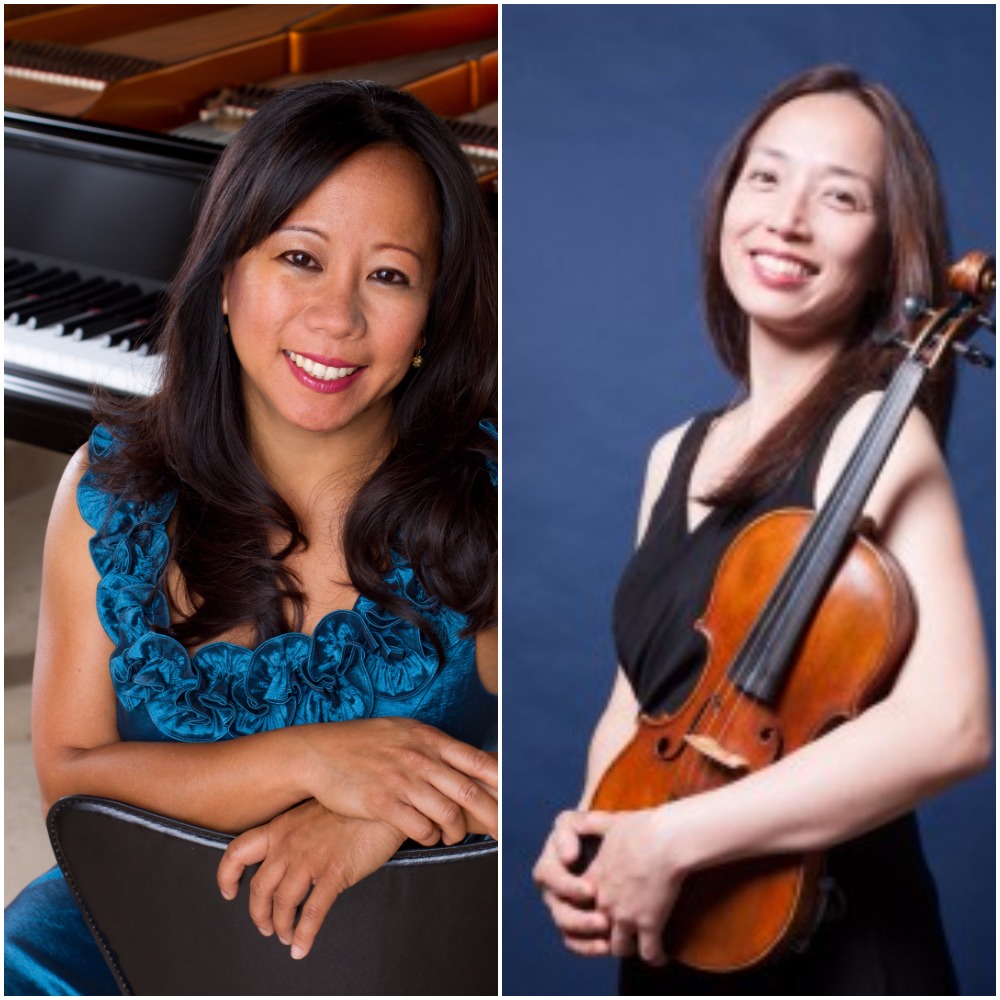 An active performer, violinist Christina Mok has become a familiar figure on the classical music scene in Northern California. She devotes herself equally to solo performance, chamber recitals, and orchestral leading.

Ms. Mok is the Concertmaster of the Stockton Symphony and the Monterey Symphony and the Associate Concertmaster of Symphony Silicon Valley. She continues to appear as guest concertmaster in many of the orchestras of Northern California. She has played with many British Orchestras, such as the Royal Philharmonic, the Royal Ballet Sinfonia, the Philharmonia Orchestra, and the Bournemouth Symphony. She has played at the Evian Festival, the Proms, Mainly Mozart Festival and Midsummer Mozart Festival.

From the time pianist, Aileen Chanco made her stunning debut with the San Francisco Symphony at the age of thirteen, she has continued to enthrall audiences and critics alike with her instinctive brand of virtuosity and sensitivity. She caught the notice of the then up and coming conductor, Kent Nagano who chose her to solo with him during an engagement with the Boston Pops. After the success of this east coast debut, Aileen was named a Presidential Scholar of the Arts and presented with a medal at the White House by the President, following which she made her debut at the Kennedy Center.

Determined to pursue a career as a performing artist, Aileen immersed herself in musical studies with Herbert Stessin at the Juilliard School where she received both her Bachelor’s and Master’s degrees in Music. Since then, she has appeared as soloist, recitalist and chamber musician throughout the United States, Canada, Europe and Asia. Concerts have included performances in New York’s Alice Tully Hall, Washington D.C.’s Kennedy Center for the Performing Arts and the Cultural Center for the Performing Arts in the Philippines. She has performed with orchestras including the Shreveport, Symphony Orchestra, Chamber Orchestra of Albuquerque, York Symphony Orchestra, Lima Symphony Orchestra and Berkeley Symphony Orchestra among others. Appearances with festival orchestras have included the Banff Festival Chamber Orchestra in Canada, the Desert Music Festival Orchestra of Arizona and Music in the Mountains Festival Orchestra in California.

In 2003, Aileen made a highly anticipated return to the Philippines, the land of her birth to debut with the Manila Philharmonic Orchestra. “We were unbelievably awed with her rare expressive musicality. Her performance is something the Manila audience at the Philam Life Theater will never forget – it was a shining moment for our country.” –THE MANILA TIMES. The collaboration was so successful that Aileen returned at the request of the Cultural Center of the Philippines to perform the Philippine premiere of John Adam’s “Century Rolls” with the Philippine Philharmonic Orchestra. Her performance was hailed as a tremendous achievement” and critics described her as an “astonishing pianist”.

Aileen has received numerous awards and honors including first place in the Young Keyboard Artist International Competition, the Pepsi-Cola Young Artist Competition, and the Seventeen Magazine-General Motors National Concerto Competition. She was a recipient of the National Foundation for the Advancement in the Arts Award and she is an alumnus of the Aspen Summer Music Festival, the Banff Centre Resident Artist Program, the Moscow Conservatory in America and the Schleswig-Holstein Musik Festival. Aileen resides in California with her husband, double bassist Bill Everett. She is both founder and Artistic Director of Music at the Mission Concert Series whose performances are held in one of California’s famous historic missions, Mission San Jose. Her passions are traveling, hiking and fencing.

Her most current CD was released in October of 2005 “Images of Three Centuries” and was recorded under the Con Brio Recordings label. American Record Guide wrote: Pianist Chanco makes her strongest and most convincing impression in Mussorgsky’s Pictures at an Exhibition, which seems to be a temperamental fit. Her sound is beautiful and the music flows well.… Many of the details of Pictures have been imaginatively worked out and beautifully delivered…Chanco also gives a lovely reading of the opening piece of Images, “Reflects dans l’eau”. Her sound is right and she is fully engaged in this rapturous little piece. Mark Fish’s “Three Ages of Woman” a work of about six minutes, feels like three improvisations on moods. The pianist gives it an effective, involved reading; sympathetic to the composer…Chanco is a talented pianist…her career seems worth watching.