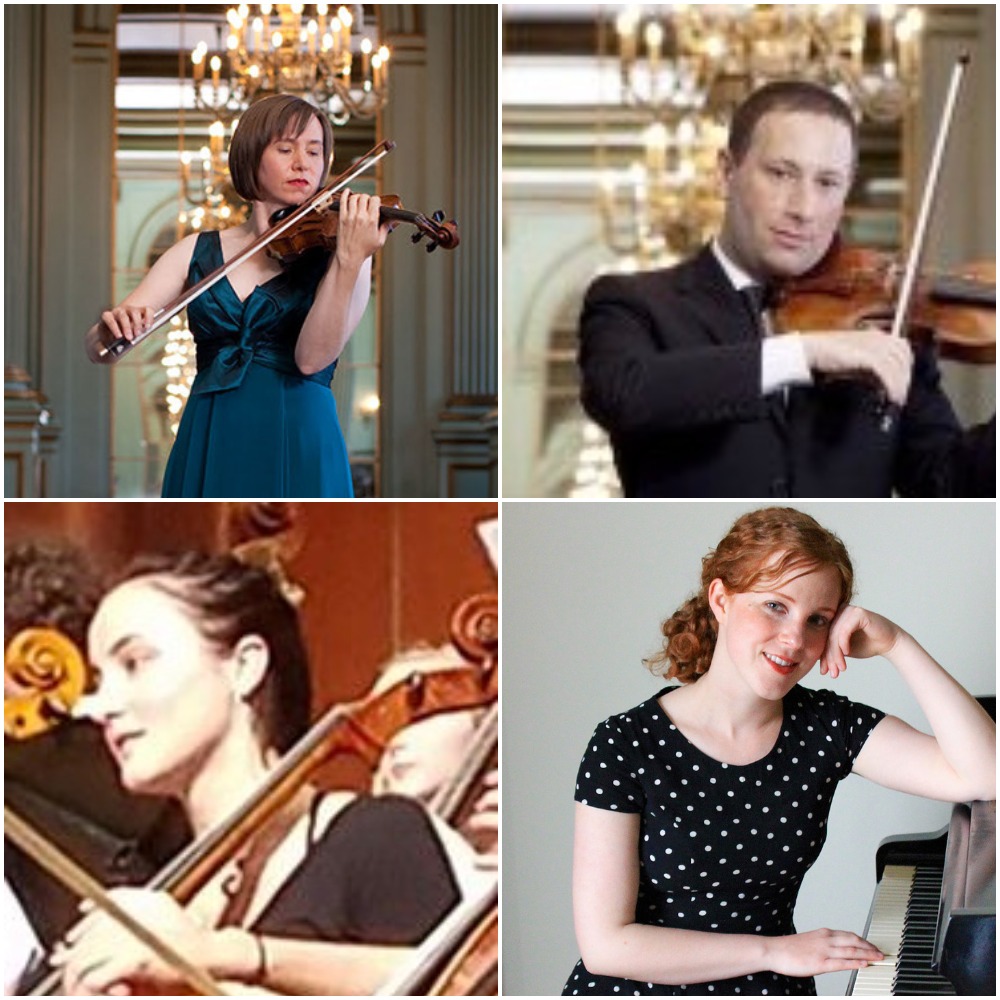 Acclaimed violinist Cecily Ward has performed throughout the United States and Europe at venues including the Kennedy Center (Washington, DC), Lied Center (Lawrence, KS), Ravinia Festival (Chicago, IL), the Lobkowitz Palace (Prague, Czech Republic), and Eroicasaal (Vienna, Austria). Praised for her “lithe finesse,” “charm,” and “rhapsodic violin,” she has collaborated with esteemed musicians including cellist Gary Hoffman, pianist, and conductor Leon Fleisher, pianist Walter Ponce, and cellist Zuill Bailey. Her performances have been featured numerous times on NPR’s “Performance Today” and are broadcast on radio stations worldwide. Ward was the founding first violinist of the Cypress String Quartet, a position she held for twenty years until the quartet disbanded in 2016. The Cypress recorded 16 critically acclaimed albums and commissioned and premiered dozens of new works from some of the most interesting and exciting composers working today, including George Tsontakis, Kevin Puts, Jennifer Higdon, Elena Ruehr, and Philippe Hersant. Central to the Cypress Quartet’s work was passionate advocacy for the relevance of classical chamber music in contemporary society. They were also deeply committed to bringing chamber music to people of all ages, demonstrated by their innovative educational programs that reached over 150,000 students. Ward taught violin and chamber music at San José State University from 2003-2009, and has been on the faculty of the Pennsylvania Academy of Music Vivace Festival, Centrum Summer Chamber Music Festival, Las Vegas Music Festival, Sequoia Chamber Music Festival, and the Banff Centre for the Arts. She has given master-classes at conservatories and universities throughout the United States. Born in Salt Lake City, Utah, Ward began studying violin and piano at the age of four. A graduate of the Interlochen Arts Academy at 15, she was first violinist of the Academy String Quartet and led the Academy and String Orchestras. Cecily then studied violin at the Cleveland Institute of Music with Donald Weilerstein earning Bachelor and Master degrees in Music Performance. An avid quartet player from an early age, she held fellowships to the Tanglewood Festival, the Aspen Music Festival, the Taos Chamber Music Festival, the Banff Centre for the Performing Arts, and the Norfolk Chamber Music Festival. Her mentors include Norbert Brainin, Zoltan Szekely, Bonnie Hampton, Sylvia Rosenberg, Robert McDonald, and Isaac Stern. Ward lives in London, UK, with her husband Mark Willsher and their two Portuguese Water Dogs.

Tom Stone was born in Chicago where he studied music with Hilel Kagan. At age 16 he attended Tanglewood where he coached with Eugene Lehner of the Kolisch Quartet and played in an orchestra under the direction of Leonard Bernstein. After this experience, his focus on music became increasingly intense. Mr. Stone went on to pursue musical studies at the Eastman School of Music and the Cleveland Institute of Music.  His major teachers have included Donald Weilerstein, Zvi Zeitlin, Gyorgy Sebok, and Bonnie Hampton. Mr. Stone has also performed in masterclasses for Issac Stern and members of the Amadeus, Emerson, Juilliard Quartets and LaSalle Quartets. He has performed with many distinguished artists including Awadagin Pratt, Leon Fleisher, Zuill Bailey, Jon Nakamatsu, Ian Hobson, and Donald Weilerstein.

Described as “brilliant” by the San Francisco Classical Voice, San Francisco-based pianist Allegra Chapman is dedicated to engaging with new audiences as a performer, presenter, and educator. Allegra has performed as soloist and chamber musician at prestigious venues throughout the United States, Europe, and China, including Alice Tully Hall, the Dame Myra Hess Memorial Concert Series, the Bard Music Festival, the Liszt Ferenc Memorial Museum in Budapest, and Xi’an Concert Hall in Xi’an, China. Her performances have been broadcast on WQXR New York, WFMT Chicago, and KALW San Francisco.

Allegra is a passionate advocate for contemporary music. She is founding artistic co-director and executive director of Bard Music West, a new San Francisco music festival that explores the worlds of 20th and 21st-century composers. From 2019-2021, she will be a resident curator at the Center for New Music in San Francisco. Allegra has worked with composers Joan Tower and Charles Wuorinen and premiered the works of many young composers. In 2012, Allegra’s unusual collaboration with Yamaha Disklavier and The Juilliard School’s Center for Innovation in the Arts was the subject of a feature article and video in the Wall Street Journal.

As an educator, Allegra enjoys a thriving teaching studio and has coached chamber music ensembles at many institutions, including San Francisco State University and Xi’an Conservatory of Music. Her student ensembles have received top prizes in regional and national competitions. Allegra is currently on faculty at the San Francisco Conservatory of Music’s Pre-College division and MTSY Studio in Xi’an China.

Allegra received her MM from The Juilliard School as a recipient of the Larson, Goldberg, and Rosenman scholarships. She graduated in the inaugural class of the Bard Conservatory of Music’s double-degree program with a BA in history and BM in piano performance. Allegra owes much to her many wonderful teachers who include Joseph Bloom, Jeremy Denk, Seymour Lipkin, Sharon Mann, Julian Martin, John McCarthy, and Peter Serkin.