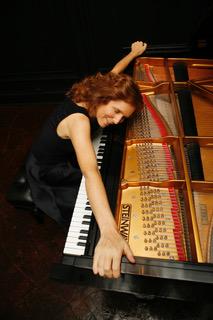 Internationally celebrated American pianist Carolyn Enger has gained critical acclaim for her lyrical and dynamic playing, as well as her deeply felt interpretations. In addition to an active performance schedule on two continents, Ms. Enger has enjoyed remarkable success as a recording artist: The New York Times selected her Naxos recording of intimate Ned Rorem miniatures, Piano Album I & Six Friends, as one of the newspaper’s “Best In Classical Recordings”, writing “Among the 90th–birthday tributes this year to the essential American composer Ned Rorem, this recording especially stands out,” while Gramophone declared, “Enger raises the miniatures to a higher level.”

Ms. Enger’s touring opportunities have included venues throughout the United States and beyond, including the Museum of Jewish Heritage in New York, the Consul General of the Federal Republic of Germany, United States Military Academy West Point, the Sheen Center for Thought & Culture, Weill Recital Hall at Carnegie Hall, Caramoor Center for Music and the Arts, The National Gallery of Art in D.C., and the National Gallery in Oslo. Deepening her commitment to multimedia collaborations, Ms. Enger was part of renowned illustrator and writer Maira Kalman’s exhibit Maira Kalman Selects at the Cooper Hewitt Smithsonian Design Museum in New York, and her recording of Arvo Pärt’s music was featured in conceptual artist Mischa Kuball’s sound and light exhibit res.o.nant at the Jewish Museum Berlin.

Recent highlights include the publication of her article, The Mischlinge Exposé: Stories of Assimilation and Conversion, in the book Women Defying Hitler: Rescue and Resistance under the Nazis, published by Bloomsbury Academic; concerts at the White Stork Synagogue in Wrocław, Poland; the Bach–Festival in Arnstadt, Germany; the Portuguese Synagogue’s Candlelight Concert series in Amsterdam; concerts in Erfurt, Potsdam, and Gotha, Germany; and recitals in the greater New York area.

Ms. Enger is dedicated to bringing music to diverse audiences in accessible civic spaces. One of her performances at the New York Public Library for the Performing Arts at Lincoln Center is featured in Frederick Wiseman’s acclaimed documentary Ex Libris, which premiered on PBS. This past winter Carolyn enjoyed her residency, showcasing her immersive film/sound project Resonating Earth, with Musica Sierra and the public school children in the Sierra Valley. One presenter shared that her performance left audiences “in complete awe of her passion, skill, and genuine warmth.”

Ms. Enger studied at the Manhattan School of Music and is a Steinway Artist.