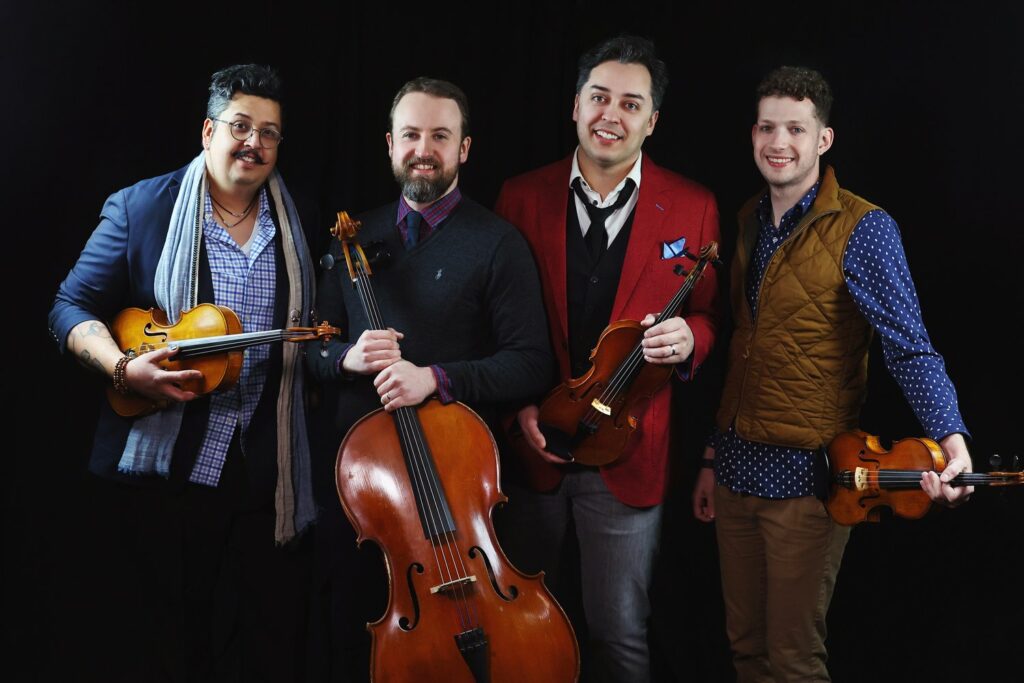 “A wonderful miniature using broad, singing melodies over an effervescent texture that evaporates right between your ears.” — Beo String Quartet

I think of music itself, particularly the music made by the Kronos Quartet, as a strategy for mustering enthusiasm and joy. It’s a way of setting the world in order, a method of carving up time in way that, seemingly by magic, changes our frame of mind, energizes us, and gives us courage and reassurance. In this piece I tried to combine techniques that were both scary and familiar to me; a cascade of natural harmonics collapses into an ecstatic chorale, which then evaporates into silence. Enthusiasm Strategies was composed for the Kronos Quartet as part of their amazing and important educational initiative Fifty for the Future. I’m honored to contribute to this project and thrilled to be part of the incredible legacy of this quartet. —Missy Mazzoli

(in-depth discussion about the piece with the composer, about rhythm and groove, and performances of some of the movements.)

“Waníyetu” is the Lakota word for “year,” as measured from first snow to first snow. The collection of seven miniature movements alternates between pure, wistful meditations and funky rhythmic romps.

“The American composer Marc Mellits cut his creative teeth transcribing Steve Reich while absorbing the music of post-minimalists such as Michael Gordon. The Fifth Quartet, Waníyetu (2015), takes its title from the native American Lakota word for winter, which can be bitingly cold in northerly parts of the American Midwest. Mellits again holds back during the opening movements before unleashing a blizzard of interlocking patterns over a powerful pulsing chord sequence in a final, impressive flourish.” —Gramophone

The Beo String Quartet is one of the top new ensembles performing today… Their performance was stellar and one of the best I have received of my music. Their virtuosic playing displays a wonderful balance of rhythmic vitality and crystal-clear articulation paired with a highly sensitive sense of legato, nuance, and phrasing.

The eclectic and highly polished Beo String Quartet has created a niche for itself as a daring, genre-defying ensemble. Rigorously trained in the classical tradition, violinists Jason Neukom and Andrew Giordano, violist Sean Neukom, and cellist Ryan Ash also know their way around contemporary expression, including the use of electronics, live sound processing, and spatial audio manipulation. Their performances of Bach, Mozart, Beethoven, Mendelssohn, or Shostakovich have been compared to those of the best among 21st-century international string quartets.

Undaunted by artistic or logistical challenges, they play the masters in a variety of settings, collaborate with living composers, and explore technology’s capacity to the fullest. Called “an absolutely spectacular group of young, hungry musicians” by composer Marc Mellits, University of Chicago, and “an ensemble whose music-making speaks to the heart as well as the mind by composer Richard Danielpour, Curtis Institute for Music, Beo defies categorization. Works such as “Haydn Recycled” and “Projection 1: Triple Quartet” combine virtuosic quartet writing and staging in various forms. Founded in 2015, Beo has to date performed more than 100 concert works, including some 45 world premieres, throughout Europe and the United States.

A highlight of the 2022/2023 concert season will be a guest appearance on January 31, 2023, under the aegis of the distinguished Morgan Library and Museum in New York City. The program includes selections from J.S. Bach’s timeless “Art of the Fugue,” BWV 1080; the New York premiere of Sean Neukom’s “People;” “Enthusiasm Strategies” by noted American composer Missy Mazzoli; and Dmitri Shostakovich’s haunting Quartet No. 8 in C Minor, Op. 110.

Slated for release in January 2023 on Beo’s own label NeuKraft Records is a new album entitled “131,” named for Beethoven’s celebrated String Quartet No. 14 in C# Minor, Op. 131. In addition to Beethoven, the recording will include Missy Mazzoli’s “Enthusiasm Strategies” and “19/20” by Beo violist and composer Sean Neukom. Other performances this season include an extensive tour throughout California, a collaboration with the Charleston Ballet in West Virginia as well as a concert presented by the Charleston Chamber Music Society, and various festival appearances, including the Festival Internacional de Música do Pará, Belém, Brazil.

Beo regularly collaborates with living composers including Richard Danielpour, Marc Mellits, Missy Mazzoli, Lawrence Dillon, Joel Hoffman, and Charles Nichols. As part of its annual residency with the Charlotte New Music Festival, Beo hosts an annual Composition Competition that yields a winning work selected from 100+ submissions. Every year, the quartet then records the composition and makes a point of programming it frequently in subsequent seasons.

NeuKraft Records was recently founded to facilitate the production and distribution of Beo’s numerous original projects without constraints of style or genre. Beo built a new, personalized recording studio space to conduct its recording, engineering, mastering, and live-streaming in-house using state-of-the-art equipment, giving the players direct control over the quality of the final product and greatly simplifying the production process. Projects released on the label include string quartet masterpieces, original art songs, and long-form concept albums.

Music education outreach is essential to the quartet’s vision. Beo has earned a reputation for its thoughtfully crafted educational programs. Although disguised as entertainment, each show is designed to teach real chamber music skills and a love for classical music to students ranging from complete beginners to pre-professionals. Also in development is a publishing effort to make the student ensemble works of Richard Neukom—father to Beo founders Sean and Jason Neukom—a strings educator with 40+ years of experience, available to elementary, middle, and high-school string ensemble educators. In some cases, these pieces have solo parts for Beo to play so they can be used as part of in-person clinics with student ensembles. Through its educational tours of elementary, middle, and high schools, short-term residencies at colleges and universities, and its annual residency at Dakota Chamber Music, Beo has shared these engaging experiences with more than 3,500 students to date.

The name “Beo” derives from Latin, meaning “to make happy.”

With new projects always in the works, be sure to stay in touch with all things Beo by subscribing to @beostringquartet on YouTube, Facebook, Instagram, and SoundCloud. Beo joined the roster of the Lisa Sapinkopf Artists in 2022.