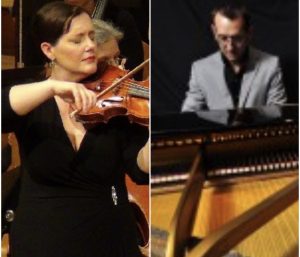 Corey McVicar, described as a “duly poetic and exhilarating” pianist by the Sydney Morning Herald, has performed worldwide. He has appeared extensively throughout his native Australia, including notable performances at the Sydney Opera House and Sydney Parliament House; he has also given concerto performances with the Sydney and Queensland Symphony Orchestras. Other international performances include solo recital and concerto engagements in Singapore at Victoria Hall; the American University and Goethe Institute in Bangkok, Thailand; in Saint Germain En-Laye, France; and throughout Asia for the Pacific and Orient Corporation.

In the United States, Mr. McVicar has given recitals at venues such as the Kennedy Center for the Performing Arts in Washington DC; Carnegie Weill Recital Hall in New York City and Strathmore Hall Music Center in North Bethesda, Maryland. His solo and chamber music performances have been heard on radio stations in Australia, France, and the United States. Most recently Mr. McVicar’s concertizing has included numerous chamber music collaborative performances and appearances with international artists in Southeast Asia and in the U.S., including tours of the Midwest and several East Coast cities as well as the San Francisco Bay area. He has recorded for VDA Classics.

Mr. McVicar has had successes in numerous solo competitions such as the New York Frinna Awerbuch International Piano Competition, the Liszt International Piano Competition (Italy), and the Yale Gordon and Dan Saslov Piano Competitions in Baltimore, USA. He earned his musical education at the Sydney Conservatorium of Music of the University of Sydney, and the Peabody Conservatory of Music of The Johns Hopkins University. Postgraduate piano studies followed in both Germany and France. The various artists with whom he has worked include Ann Schein, Yvonne Lefebure, Leon Fleisher, and Murray Perahia.

Before moving to San Francisco, California in 2011 Corey McVicar served on the faculty of the Peabody Conservatory of Music of the Johns Hopkins University and the Peabody Preparatory for 23 years. He also held an adjunct piano faculty teaching position at Columbia University in New York. Mr. McVicar has given numerous piano master classes on both coasts of the United States, in Asia, and in Australia. He is currently a Professor of Piano at the San Francisco Conservatory of Music.

In January 2005 Amy Beth Horman made her debut with the New Mexico Symphony, performing Mozart’s 4th Violin Concerto with Music Director Guillermo Figueroa conducting. Of that performance, Maestro Figueroa wrote “Ms. Horman is an excellent, refined performer. Her violinistic skills are of the highest order, with a fluent, polished technique, and a warm, appealing, dark burnished tone.”

Among other recent orchestral appearances have been performances of the Brahms, Nielsen, Mendelssohn, and Barber concertos with several orchestras in the mid-Atlantic region as well as recitals with such artists as pianist Brian Ganz, with soprano Rosa Lamoreaux, and with pianist Michael Sheppard at the F. Scott Fitzgerald Theatre as part of the National Philharmonic’s 2004 Chamber Music Series. During the summer of 2004, pianist Awadagin Pratt personally invited Ms. Horman to participate in his “Next Generation” Chamber Music Festival.

In January 2003 Ms. Horman made her debut with the Fairfax Symphony under the baton of Music Director William Hudson in a performance of the Beethoven Violin Concerto. Of this performance, The Washington Post critic wrote “Violinist Amy Beth Horman showed she had the virtuosity and stamina necessary to navigate Beethoven’s colossal Violin Concerto… Horman traced soaring lines and rich textures with a golden, full tone that complemented the full-blooded support of the orchestra.”

Ms. Horman won the Deane Sherman Award as one of Maryland’s most promising young artists in 2000. In 2001 she was awarded the Amadeus Career Grant by the Amadeus Orchestra, an ensemble with whom she subsequently has been regularly featured; her appearances with that orchestra during the 2002-03 season included a performance of the J. S. Bach Double Concerto with her mentor Jody Gatwood as well as a performance as soloist in Mozart’s Violin Concerto No. 4.

Ms. Horman won both the high school and college divisions of the National Symphony Orchestra’s Young Soloists Competition. Since making her debut with the NSO as a Young Soloists winner, she has performed within Europe with such orchestras as l’Orchestre de Meudon and l’Orchestre Regional de Paris. In the Washington metropolitan area, she has performed with the Fairfax and McLean Symphonies, the Prince Georges Philharmonic, and the Amadeus Orchestra. She has also performed at the Kennedy Center’s Terrace Theater and on its Millenium Stage series, at Constitution Hall, and at the Strathmore Center for the Performing Arts. She has been featured on French-Swiss television and on American radio broadcasts.